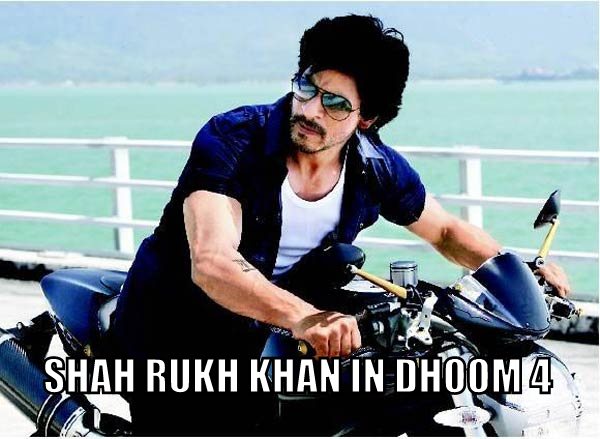 Dhoom is the most successful action franchises of Bollywood. The three instalments of the movie released till now have been blockbusters at the box office. After the grand success of Dhoom 3 which starred Aamir Khan, there have been never-ending rumours about who will play the lead in the next film of the franchise.

After John Abraham, Hrithik Roshan and Aamir Khan, the buzz was strong that superstar Salman Khan will be seen as a baddie in the next film of the Dhoom series. Well, this news is certainly not true as Salman is currently working for Yash Raj’s Tiger Zinda Hai.

As per the new reports coming, it’s not Salman but Shah Rukh Khan who has been considered to play the lead in Dhoom 4.

According to BollywoodLife.com, SRK is a perfect choice for the film as he is a pro at playing grey characters. SRk has proved his mettle as a villain in movies like Darr, Don, Baazigar and Don 2.

A source has been quoted as saying, “Adi wants to take Dhoom 4 to the next level and he’s asked Maneesh Sharma to write the film. He’s currently scripting it. For those in the know, Vijay Krishna Acharya aka Victor (director of Dhoom 3) is now busy with Thugs of Hindostan. So the film will change hands again. Maneesh will probably direct it as well.”

Shah Rukh and Maneesh previously worked together in ‘FAN’ which was a major box office failure. “Although Fan didn’t work at the box office, SRK and Maneesh have discussed working together again. Nothing is on paper as of now, but for SRK, all that isn’t required when it’s a YRF film. Only a call from Adi is enough”, a source told BollywoodLife.com.

There hasn’t been any official announcement by the producers or actor. We will have to wait and watch. The last instalment of the Dhoom franchise, Dhoom 3 was released in Dec 2013. It was the highest grossing movie of Bollywood with the lifetime collection of 280+ crores.

Shah Rukh Khan has just one confirmed movie as of now. In Anand L Rai’s next film, he is playing an intelligent dwarf man. The movie also stars Anushka Sharma and Katrina Kaif. You must check the list of Shah Rukh Khan’s upcoming movies.

Which actor do you think is the perfect choice for Dhoom 4? Vote now.