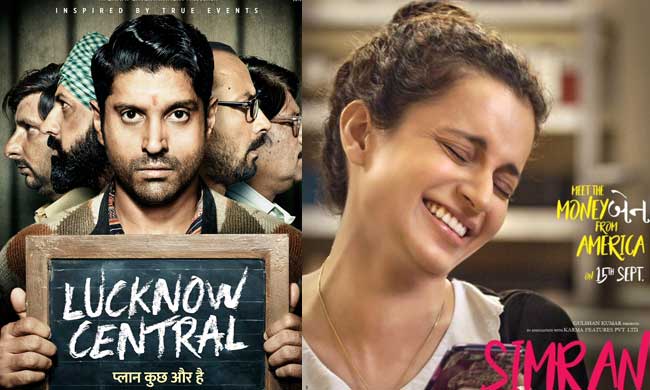 After a disappointing opening day with the collection of 2.77 crores, Simran witnessed a growth of 35.74% on its second day. The movie earned 3.76 crores on its second Saturday to take its total collection to 6.53 crores. Kangana Ranaut’s controversial statements about the Bollywood stars have certainly helped the movie.

Made on a budget of 30 crores, the movie has recovered around 15 crores from music, satellite and overseas rights. The producers still need to recover the remaining amount from India theatrical distributor share. Simran needs to earn more than 40 crores to be in a safe zone. This certainly looks a daunting task after a poor performance on Friday and Saturday.

Farhan Akhtar’s Lucknow Central is also struggling to make an impact as far as box office numbers are concerned. After a disastrous opening with the collection of 2.04 crores, the movie saw a growth of 38% on its second day. It earned 2.82 crores on Saturday to take its total collection to 4.86 crores.

Made on a budget of around 35 crores, Lucknow Central needs to earn at least 35 crores to be in a safe zone. The numbers so far have been disappointing and it seems that it will be another disaster for Farhan Akhtar after Rock On 2.