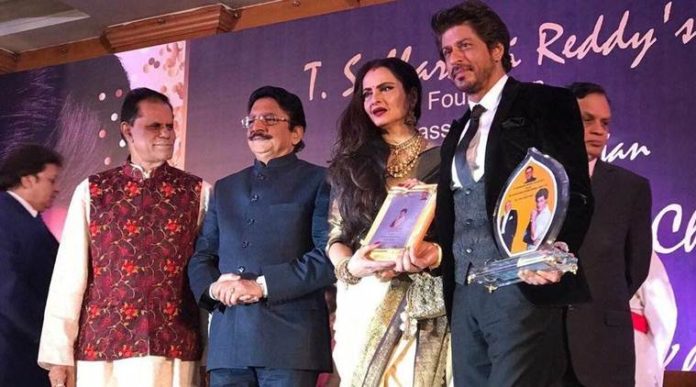 Yesterday, the king of Shah Rukh Khan was awarded the 4th National Yash Chopra Memorial Award.  Shah Rukh is the fourth recipient of this prestigious award, awarded for outstanding contribution to Indian cinema. Amitabh Bachchan, Lata Mangeshkar, and Rekha are the previous recipients.

SRK looked happy and emotional as he accepted the award. In his acceptance speech, he said, “This is one of the most important evenings of my life. I am very emotional. Yash Chopra has single-handedly created my career. It is a strange circle that I am receiving an award, which honours him and is in his memory, and I am who I am because of what Yash Chopra made me do.”

Speaking to the media before the ceremony, Shah Rukh revealed that this is one honour which he doesn’t think he deserves. “I am extremely undeserving but I am happy that the jury considered me for it. The reason for this is genuinely a gracious, wonderful and fantastic feeling that the whole family has given me over the years. This can be the only reason for this. It can’t be my talent. So, it feels really special to receive this award. It is very personal. I can’t express how emotional it is for me. It is a personal moment for me, having worked with him for 20 years, right from when I started and then to lose him as we walked along the path of filmmaking… it is emotional for me,” the actor said.

Shah Rukh has worked with Yash Chopra in films like Darr, Veer-Zaara, Dil To Pagal Hai and Jab Tak Hai Jaan. Shah Rukh remembered Yash Chopra as he said, “Yash ji was very basic and simple. He never allowed the craft to take over his art. He made films from his heart. Even today when I work with directors, we talk more about Yash ji than the films that I am working on with them.”

The award ceremony was graced by legendary Bollywood celebs like Yash’s wife Pamela, Jaya Prada, Shatrughan Sinha, Simi Garewal and Padmini Kohlapuri. Here are some pics from the event.