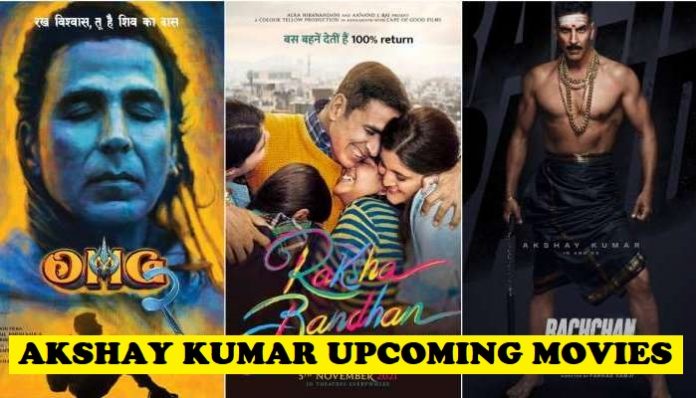 Akshay Kumar’s upcoming movies releasing in 2022, and 2023 with the release date, star cast, budget, and other details.

Akshay Kumar is one of the most prominent actors in Bollywood along with Salman, Shah Rukh, Aamir, and Ajay Devgn. He is the most versatile actor in Bollywood. In a career span of 29 years, Akshay Kumar has been an inconsistent performer at the box office. However, in the last five years, his success ratio has improved drastically.

In fact, he is now the most consistent actor. He is consistently delivering hit movies. Every Akshay Kumar movie is a potential hit these days. Let’s have a look at Akshay Kumar’s upcoming movies to be released in 2022 and 2023.

A story that touches your heart so deeply & so instantly,it’s the quickest I’ve signed a film in my career.Dedicating this film,#RakshaBandhan to my sister,Alka & to the most special bond in the world…that of a brother and sister.Thank you @aanandlrai,this one is very special pic.twitter.com/3h4wxPltC1

This Deepawali,let us endeavor to keep alive the ideals of Ram in the consciousness of all Bharatiyas by building a bridge(setu) that will connect generations to come.
Taking this mammoth task ahead,here is our humble attempt – #RamSetu
Wishing you & yours a very Happy Deepawali! pic.twitter.com/ZQ2VKWJ1xU

Besides these confirmed releases, Rowdy Rathode 2 is in the scripting stage and is expected to go on floors by next year.

The release date of all the above-mentioned films may get changed. We will update the dates as soon as official announcements are made.

Which of Akshay Kumar’s upcoming movies are you waiting for? Share your thoughts with us in the comments section.

Upcoming Bollywood Movies Of Other Actors