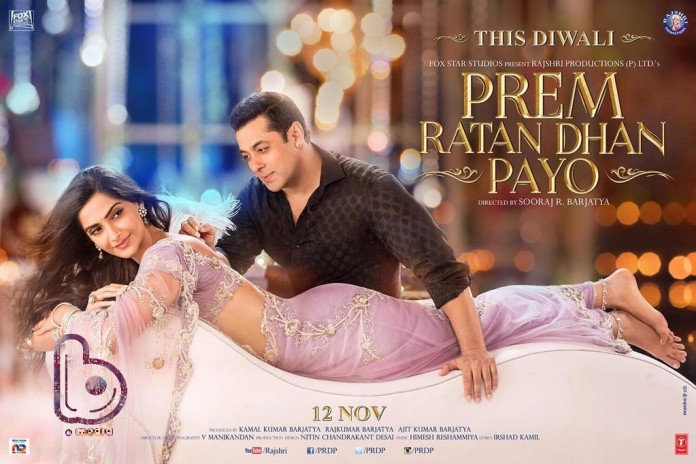 The lyrics of Prem Leela depict Ram-Leela setting perfectly. The voices of Aman Trikhia and Vineet Singh are praiseworthy though we highly doubt the song will be much loved. It just seems to be an introductory number for Salman Khan’s character.

The title track Prem Ratan Dhan Payo is the perfect example of Himesh Reshammiya’s grip on traditional Indian music. Palak Muchchal’s voice is like honey. Though the song is more of a visual treat with all the grandness in the video of the song.

Jalte Diye is a semi-classical romantic melody. The song begins with Harshdeep Kaur‘s voice supported by guitar in the background. Then, Amul Star of India fame Anwesshaa lifts up the mood of the song. Vineet Singh and Shabab Sabri have also supported the song well. A very melodious song!

Aaj Unse Milna Hai is a typical Sooraj Barjatya song where the hero is on the way to meet his dream girl. Shaan does a good job in this average track.

Jab Tum Chaho takes us back to the 90’s era with the heroine complaining about the hero and he tries to win her back. Mohammed Irfan, Darshan Raval and Palak Muchhal have lent their voices to the song.

Halo Re is based upon the Radha-Krishna story with vocals of Aman Trikha. The song becomes a little boring after a para. Though the song may get famous in Dandiya and Garba nights.

Tod Tadaiyya is supposedly the dance number of the album and may also become a hit. The ‘Ouch’ in the starting and in between is the one good thing about the song. The crooning of Neeraj Sridhar and Neeti Mohan is just average.

Himesh Reshammiya himself got behind the mic for Bachchpan Kahan. The song is a sentimental number about differences between two brothers. Though the song fails to touch our hearts.

Aaj Unse Kehna Hai is the female version of Aaj Unse Milna Hai. It is sung by Aishwarya Majumdar with just the mukhda. The song ends with the few lines from the title track of the movie in Shaan and Palak Muchhal’s voice.

The feel of the songs reminds us of Salman’s other films with Sooraj Barjatya like Maine Pyar Kiya, Hum Aapke Hain Koun and Hum Saath Saath Hain. The soundtrack fails to deliver even a single impressive track. But if you still miss songs from the 90’s, the album of Prem Ratan Dhan Payo is for you