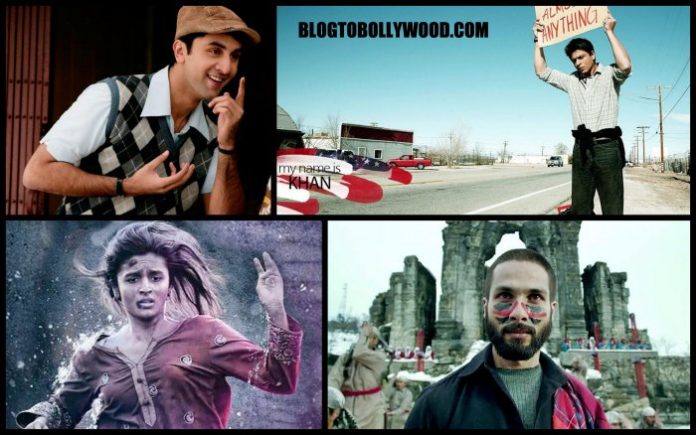 Who says our actors can’t pull off roles that require getting out of their comfort zone? Here are the top 10 challenging roles played by Bollywood actors in the last decade that prove my statement:

Farhan Akhtar underwent an amazing transformation to portray Milkha Singh’s character on screen. We were lucky to witness the physical labour that an athlete has to undergo to become successful, Farhan was the epitome of their dedication. He put his heart and soul into the movie. This was without a doubt one of most challenging roles played by Bollywood actors.

Ethan Mascarenhas was perhaps the most challenging role of Hrithik Roshan’s career till date and he pulled it off marvellously. His immobility forced him to express himself using facial expressions and his eyes which brought out a whole new Hrithik!

3. Aamir Khan in Dangal (He was perfect in Ghajini and PK as well)

Aamir Khan went through an amazing transformation for the movie Dangal. He gained around 22 to 25 kilos to play the role of a 55-year-old man and then later, he has to shed all this extra weight within 25 weeks. Aamir’s health and body were affected a lot due to this sudden weight change but Mr Perfecionist pulled it off. Not only did he lose and gain all this weight, he also gave a memorable performance in the movie as Mahavir Singh Phogat which made the movie a huge success at the box-office.

Priyanka Chopra reinvented herself in Barfi. Before Barfi, we knew her as a good-looking actress who can act, but after Barfi we were sure that she is a pool of talent. The way she played the role of an autistic girl who is abandoned by her rich parents drew the focus completely on her. Kudos to PC!

Sanjay Leela Bhansali has a habit of creating masterpieces and bringing out the best of his actors. Black is one of those movies. Rani Mukherji was simply fantastic as a blind and deaf girl. Amitabh Bachchan may have outdone her in some of the scenes but we still can’t deny that Rani’s performance was commendable.

Amitabh Bachchan out on his best foot forward for an emotional drama film directed by R. Balki. The veteran actor played an intelligent and witty 12-year-old boy with an extremely rare genetic disorder called progeria. Bachchan just nailed it and his performance as Auro is the film is one of the best of all time. he was awarded Filmfare, Nation award for best actor for his tremendous act in the film

Lagda Tyagi in Omkara is one character to that brought Saif Ali Khan back into the leading actors list. Cunning, devious, sly and manipulative are few words to describe his character but there’s only word to describe Saif’s acting in the movie- brilliant!

8. Shah Rukh Khan in My Name Is Khan

Shah Rukh Khan has tainted himself to an extent with his choice of movies since the last few years. But whenever we look back and remember his performance in a movie like My Name Is Khan, we understand why he is one of the biggest superstars of Bollywood. Rizwan Khan suffering from Asperger’s syndrome was a very complex role and SRK did it with complete ease.

Shahid Kapoor as the lead Haider is his best performance till date. He is able to bring every emotion alive and left no stone unturned. He deserves all the accolades for this role as he has hit the bull’s eye with Haider. Alia Bhatt has come a long way since her debut in Student Of The Year in 2012. In Udta Punjab, she played a Bihari migrant Bauria. Her dream to national level hockey for the country was shattered so she came to Punjab to work as a labourer. Alia Played a strong girl who manages to escape from the gang of drug peddlers but not before she was physically and mentally assaulted by several men. Alia’s strong performance won applauds all over the country and she was awarded Filmfare best actress award.

Well, Ranbir Kapoor finds a special place in the list because we just can’t ignore his brilliant performance as a deaf and dumb man in Barfi. The actor was simply incredible in the movie. His charming personality and innocent behaviour in the film won him heaps of praise. Not only this, he was awarded the best actor Filmfare award as well. Any other challenging roles played by Bollywood actors that come to your mind? Tell us below in the comments section.