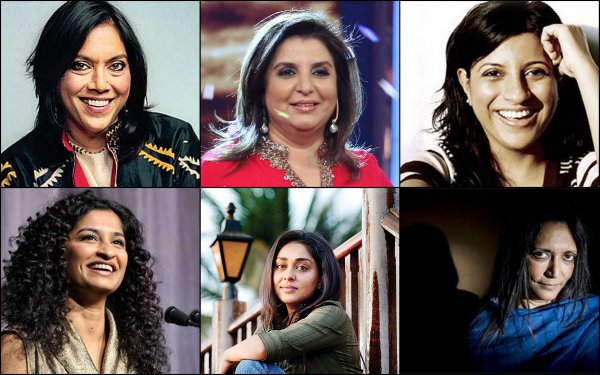 There’s no lack of talent in Bollywood, whether it comes to acting, direction or any other film-related art. Our ladies run side-by-side with our men when it comes to directing a perfect movie. Here’s a list of 10 most promising female directors of Bollywood-

Formerly a journalist, Anusha Rizvi made her debut as a director with ‘Pipli Live’. The film was critically acclaimed by many and went on to win Best First Film award at the Durban film festival and the Gollapudi Srinivas Award. She is working on her next film titled Afeem, a Bhojpuri adaptation of Amitav Ghosh’s novel Sea of Poppies.

Deepa Mehta is an Indo-Canadian director best known for her Elements trilogy of Fire, Earth, and Water. Her other notable films are Heaven on Earth, Beeba Boys etc. She has also received the Governor General’s Performing Arts Award for Lifetime Artistic Achievement, Canada’s highest honour in the performing arts.

Gauri started her career as an ad-maker and made her memorable directional debut with the Sridevi starrer movie ‘English Vinglish‘. Post that, she featured in the Financial Times 2012 list of ’25 Indians To Watch’ and Rediff’s list of ‘Bollywood’s 5 Best Directors of 2012’. Her latest release Dear Zindagi was a hit and it was proof of this directors’ talent.

Aamir Khan’s second wife Kiran Rao started her career as an assistant director for Lagaan directed by Ashutosh Gowariker, whom she also assisted on Swades. She even appeared as a supporting actress in Dil Chahta Hai. She scripted and directed the film Dhobi Ghat and she has started writing her next film which will have roots in Kolkata.

Daughter of writer-director Gulzar and former actress Raakhee, Meghna initially worked as a freelance writer. She later assisted her father in movies like Maachis and Hu Tu Tu. She directed her first film Filhaal in 2002 and her second movie was Just Married. Talvar has been her most acclaimed movie till date. Her next film will be based on Harinder Sikka’s book ‘Calling Sehmat’, an espionage-thriller revolving around a Kashmiri woman married to a Pakistani army officer.

Mira Nair is best known for her Monsoon Wedding, Salaam Bombay, and The Namesake. Salaam Bombay was nominated for the Academy Award for Best Foreign Language Film. She was also awarded the India Abroad Person of the Year in 2007 and received the Padma Bhushan in 2012. Her latest film Queen of Katwe gained a lot of applause from the critics.

Rajshree’s first film was Chaurahen which was based on four short stories of prominent Hindi novelist Nirmal Verma. But due to financial reasons, the movie’s release got delayed and her second movie Aisha is considered to be her debut as a director. Rajshree was not happy with the final cut and said that Aisha is not her movie. She also directed the ‘Biryani’ segment from X: Past is Present. She has turned producer of the TV show Bin Kuch Kahe.

Reema made her debut in 2007 with Honeymoon Travels Pvt. Ltd. After that, she made a comeback with Talaash, which went on to be one of the best thrillers in Bollywood. She is also an associate with Excel Entertainment since the beginning and she has assisted both Farhan and Zoya Akhtar in all their films and other projects. In 2018, Akshay Kumar will be seen as the lead in Reema’s Gold, based on the story of India’s first Olympic medal win.

Known for her film and book Amu which explores the suppressed history of the genocidal attacks on Sikhs in Delhi in 1984, Shonali Bose came into a limelight with her recent movie Margarita With A Straw. The movie’s script won the Best Script award at the Sundance Festival Writer’s lab.

Born to the writer, lyricist Javed Akhtar, and Honey Irani, Zoya Akhtar has given us many amazing films including her debut Luck By Chance. He second film Zindagi Na Milegi Dobara and won her the Filmfare Award for Best Director. Her recent movie Dil Dhadakne Do also did very well at the box-office. Currently, she is working on her next film Gully Boy that features Ranveer Singh and Alia Bhatt. Farah Khan is the most successful female director when it comes to the box office performance of the movies. Out of four movies directed by her, three were blockbusters at the box office. Unlike other filmmakers listed above, Farah is known for making high-hearted family entertainers.

We look forward to seeing more work from these supremely talented actresses.

Dear Zindagi Teaser 2 : Alia Bhatt tries to be funny but fails in the cutest way!