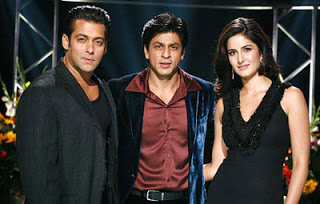 Salman Khan to shoot a special song with SRK, Katrina for Dwarf film. The song will be shot on Tuesday at Yash Raj Studios.

There have been reports of Salman Khan being offered a special cameo in Aanand L Rai’s Dwarf film in which Shah Rukh Khan is playing an intelligent dwarf man. The movie also stars Katrina Kaif and Anushka Sharma. The shooting for the movie started last month in Mumbai and some crucial scenes have already been shot.

Well, we have got an exclusive news for you. Salman Khan has indeed accepted Shah Rukh Khan’s request and he will be shooting for a special song on Tuesday at Yash Raj Studios. The song will also feature Shah Rukh Khan and Katrina Kaif. It will be a treat for fans to watch their favourite stars shaking leg together along with hottie Katrina Kaif. Meanwhile, Katrina is working will all three Khans. She will be seen with Salman Khan in Tiger Zinda Hai. The actress also has a special role in Aamir Khan’s Thugs of Hindostan.

Shah Rukh and Salman’s friendship is getting deep day by day. The two have been helping each other personally as well as professionally. Shah Rukh Khan had a special cameo in Salman Khan’s recently released film Tubelight. The actor played a magician in the film and his role was appreciated by the audience.

Aanand L Rai’s dwarf film hasn’t been titled yet. Produced by Red Chillies Entertainment and Colour Yellow Productions, the movie is scheduled for release on 22 Dec 2018.