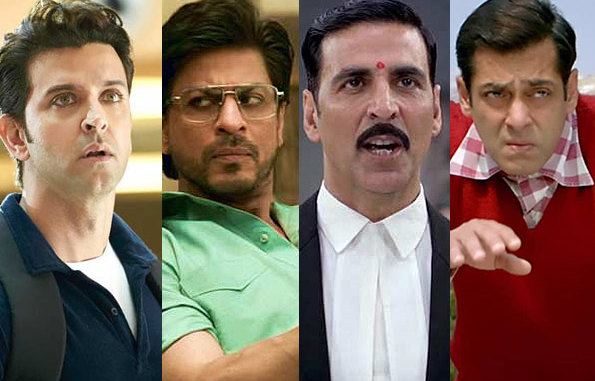 It’s time to vote for the best actor in the first half of 2017 and the nominations are SRK, Salman, Akshay, Nawaz and Hrithik.

Six months of 2017 have passed and its been a roller-coaster year for Bollywood stars and their fans. More than 250 small, big budget movies have been released so far and out of them, only a few have managed to earn respect and money at the box office. While it was south blockbuster Bahubali 2 which took all the limelight from the Bollywood movies released in the first half of the year. It’s been a disappointing year so far as far as box office performance of the Bollywood movies is concerned. We can only hope for the best in the coming months.

Leave aside the box office part, our actors have delivered some superb performances in the first half. Be it Hrithik Roshan’s blind man avatar or Shah Rukh Khan’s gangster avatar in Raees, our superstars worked hard for their roles. Let’s have a look at the best actors in the first half of 2017 and vote for the best.

The only thing good about Raees other than Sunny Leone’s dance number is Shah Rukh Khan’s incredible performance as the gangster/bootlegger. Raees was a welcome change for SRK as, before it, he was getting involved in senseless movies. With the collection of 138 crores in India, the movie was a decent hit at the box office.

There is no stopping this man when in comes to versatility and delivering hit movies one after another. Akshay continues his prime form with Jolly LLB 2. While Jolly LLB 2 was nowhere close to the first part, Akshay Kumar manages to deliver good performance as a crooked lawyer. The movie was a super hit at the domestic box office with the collection of 117 crores.

There is no denying that Irrfan is one of the best actors in the industry. It is high time that we start taking his movies on a serious note. His latest release Hindi Medium, not only won hearts but also emerged as a surprise hit at the box office. Irrfan’s realistic performance in the film will make you fall in love with the film. Nawaz’s performance in the movie was creepy to hell. He played a school teacher in the film and despite having shades of grey, you fall in love with Siddiqui’s character.

Words are not enough to applaud Rao’s performance in trapped. Rao’s nailed the character of a man who got trapped in his own flat. The expressions, helplessness and feeling of his character will blow your mind. Salman Khan’s childish charm and innocence were the only pluses in an otherwise unforgettable Tubelight. The movie failed to meet expectations as far as box office numbers are concerned.

These are the top 8 male performances for us in the first half of 2017. It’s time to wait for the best. Share your views with us in the comments section.