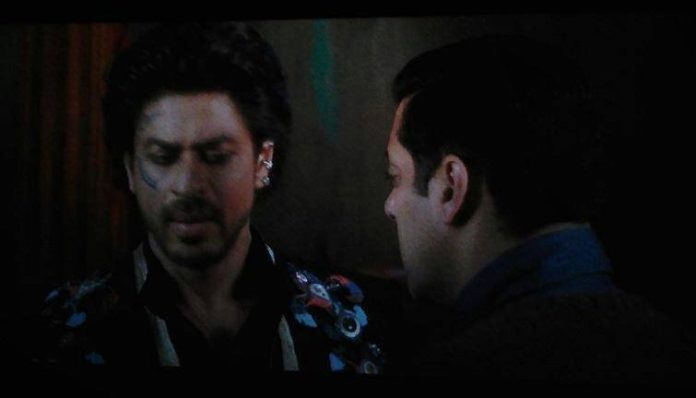 Salman Khan’s Tubelight is the most awaited Bollywood movie of 2017. It has created tremendous buzz before release and is expected to take set the box office on fire. Salman Khan fans have a big reason to celebrate as their favourite star is back with another Eid release. What makes it more exciting is the fact that Salman and Shah Rukh Khan are reuniting after a long gap of 10 years. Salman and Shah Rukh last worked together in Farah Khan’s Om Shanti Om and their fans just can’t wait anymore to watch them together on big screen.

Shah Rukh Khan is playing a special cameo in Tubelight. His cameo has been touted as one of the most important roles in the movie. While we have to wait for one more day, Tubelight has been released in UAE today. With the release of the movie, Shah Rukh Khan’s look from the movie went viral. The actor is playing a magician names Goga Pasha in the film. It is Goga Pasha who helps Salman aka Laxman is realising his strength and helps him find his brother Bharat. Shah Rukh Khan’s pics from the film are making us all excited and we just can’t wait for tomorrow now. Have a look at the pics: Salman Khan Tubelight will release tomorrow in India. It is an official adaptation of Hollywood movie Little Boy. The movie also stars Sohail Khan, Late Om Puri, Chinese actress Zhu Zhu and Mohammad Zeeshan Ayub. The movie is expected to set the box office on fire. It has a potential to become the third consecutive 300 crore movie of Salman Khan after Bajrangi Bhaijaan and Sultan.