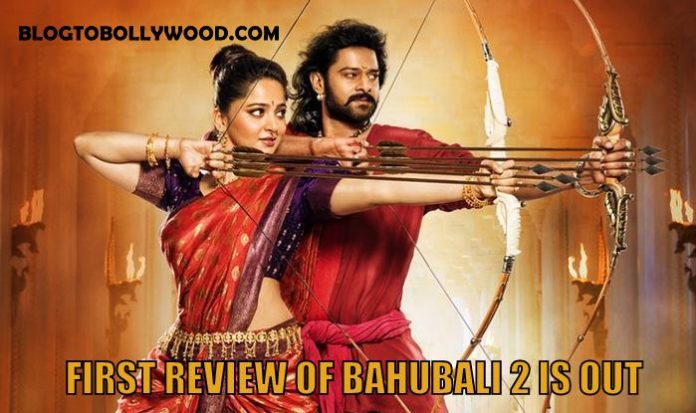 First review of Bahubali 2: Dubai film critic Umair Sandhu has given a 5-star rating to Bahubali 2, saying that the movie will rewrite box office history.

While we have no other option rather than waiting for Bahubali 2, Umair Sandhu, the film critic from UAE watched the premiere show of the movie yesterday and has given 5 stars to the movie.  Yes, the first review of this year’s most awaited review is out. The Dubai premiere of the film was held last night and in attendance were the stars of Bahubali 2, Rana Dagubati, Anushka Shetty, Prabhas, Tammannah and director SS Rajamouli.

Umair Sandhu, a renowned movie critic from UAE was also one of the lucky people who watched the premiere of the film yesterday in Dubai. Umair shared his review on twitter through a series of tweets. Let’s read what Umair has written on his time.

In his first tweet he wrote, “First Half of #Baahubali2 Done !!! Totally SPECTACULAR & Terrific! No Dull Moment throughout the film! Hatsoff to #Prabhas! #UAECensor.”

He added, “2nd Half of #Baahubali2 Done! Best film i’ve ever seen in #India! History will be Rewritten this Friday !! ALL TIME BLOCKBUSTER! ”

Umair Sandhu has written a detailed movie review of Bahubali 2. Excerpts from his blog: Every sequence of BAAHUBALI 2 is a marvel that can easily be compared to the best of Hollywood. The grandiose sets, VFX, sound, edit, cinematography and most importantly, the screenplay of BAAHUBALI 2 is beyond fantastic. Mindblowing Story, Screenplay, Dialogues, Music & Screenplay. Prabhas gave Career Best Performance ever. Rana Daggubati, Anushka Shetty & Tammannah are Fantastic. Sathayraj is Outstanding! Good acting by all supporting actors.   On the whole, BAAHUBALI 2 makes you proud that an Indian filmmaker dared to dream big and accomplished it. BAAHUBALI 2 is definitely not to be missed….”

Umair Sandhu has given 5 stars to Bahubali 2, terming it as the best film ever made in India. This review by Sandhu has certainly made us more excited for the movie. 28 April seems to far away.

The advance booking of Bahubali 2 is going in full swing in India. The movie is releasing on 6500 screens across the country and is expected to shatter all box office records. Directed by S.S. Rajamouli, Bahubali 2 is a sequel to 2015 blockbuster film Baahubali: The Beginning.