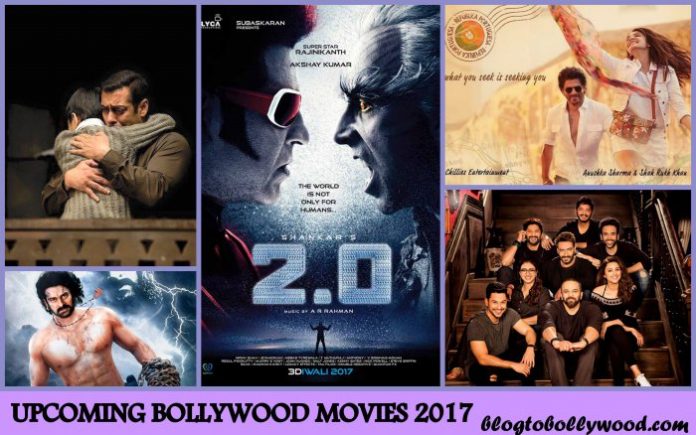 Let’s have a look at the list of Bollywood movies to be released in 2017. The list contains the detail of the movie like the star cast, director, genre etc. We will keep on updating this list as and when the announcement about the new releases are made.

2017 will saw some big budget movies like 2.0 and Baahubali 2. Apart from these big budget movies, some most awaited Bollywood sequels like Golmaal Again, Tiger Zinda Hai, Judwaa 2 will also hit the screens in 2017. Shah Rukh Khan and Salman Khan have each while Akshay Kumar has three releases in 2017. Let’s have a look at the list of upcoming Bollywood movies 2017.

We will witness the biggest clash of the year between Hrithik Roshan’s Kaabil and Shah Rukh Khan’s Raees on 25 Jan 2017. Shraddha Kapoor and Aditya Roy Kapur’s Ok Jaanu is another prominent release of January. It will hit the screens on 13 Jan.

Akshay Kumar’s Jolly LLB 2 will be the biggest release of February 2017. It will hit the theaters on 10 Feb. Vishal Bharadwaj’s most ambitious project Rangoon starring Shahid Kapoor, Kangana and Saif is slated for release on 24 Feb.

Parineeti Chopra’s comeback film Meri Pyaari Bindu will hit the big screens on 12 May 2017. It will clash with Irrfan Khan’s Hindi Medium. Arjun Kapoor and Shraddha Kapoor’s Half Girlfriend will release on 19 May. The movie is based on Chetan Bhagat’s best-selling novel of the same name.

Rohit Shetty’s Golmaal Again, Akshay Kumar and Rajinikanth starrer 2.0 will shine at the Box Office in October. Golmaal Again is also expected to hit the theaters on 6 October. Akshay Kumar and Rajinikanth starrer 2.0 will release on 18 Oct 2017. Aamir Khan’s Secret Supertar has also been postponed and it will now clash with 2.0.

Sanjay Leela Bhansali’s most ambitious project Padmavati starring Ranveer Singh, Deepika Padukone and Shahid Kapoor will release on 17 Nov 2017. Padmavati is touted to be the most expensive movie of Bollywood.

Last updated on 10 April 2017. You can bookmark this page as we will keep on updating it as soon as the release dates of the new movies are announced.