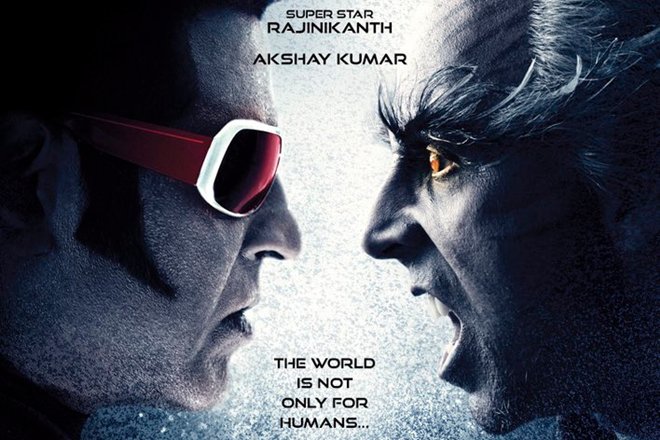 A Shocker: Akshay Kumar Was Paid More Than Rajinikanth For Robot 2.

Robot 2 or 2.0 is the most awaited movie of 2017 along with biggies like Bahubali 2, Tubelight and Tiger Zinda Hai. 2.0 is a sequel to 2010 blockbuster film Enthiran – The Robot. Rajinikanth will reprise his double role as Dr Vaseegaran and Chitti but this time the lead antagonist will be played by Bollywood superstar Akshay Kumar. He will play Dr Rischards an ornithologist who turns into a crow as a result of a wrong experiment.

Akshay Kumar’s first look as a Crow-Man received huge applause from the fans. Akshay has worked really hard for his character in the movie. The actor has to work on his makeup for almost 4 hours everyday. It’s been a pain for Akshay as he usually stay away from makeup. Well, all his pain is now showering big money. It is hard to believe but Akshay Kumar has been paid more than Rajinikanth for Robot 2.

Read: The Satellite Rights Of  Robot 2 sold for record price

A report in leading Tollywood website Tollywood.net writes, “It is heard that Akshay Kumar was paid bomb and his remuneration is more than Rajinkanth. He was paid Rs 2 Crores a day and the amount that comes after calculation, is more than the remuneration of Rajinikanth. The  makers and technicians are  tight-lipped about the matter, but according to the inside sources, Akshay charged more than Rajinikanth.”

Robot 2 is the most expensive film ever made in India. It has been made on a huge budget of 400 crores.  The movie also stars Amy Jackson, Sudhanshu Pandey, Adil Hussain among others.

As per the latest news, Robot 2 will now clash with Aamir Khan’s Secret Superstar. Both movies are expected to to hit the theaters on 18 Oct 2017. Produced by Lyca Productions and directed by Shankar, Robot 2 is expected to take earth-shattering opening at the worldwide box office.