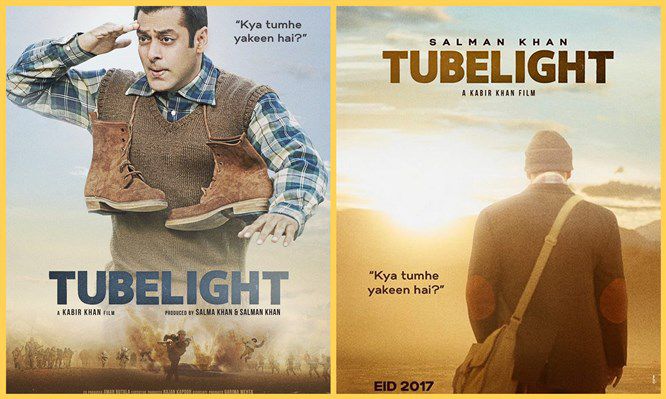 Tubelight Movie Posters: Salman Khan has released the posters of his upcoming Tubelight and it has certainly got us excited.

Salman Khan’s Tubelight is the most awaited Bollywood movie of the year. Slated for release on 23 June 2017, the movie also stars Sohail Khan, Zhu Zhu and Om Puri. The makers of the movie have started the promotion activities with two posters released in two days. While the first poster had Salman Khan facing his back, the second one has him facing the camera. In the second poster of Tubelight, Salman Khan looks cute as he can be been sporting a checkered shirt along with a sweater and with his shoes tied around his neck. He is seen saluting someone which left us wondering what the film is all about. The makers have certainly raised the excitement with these intriguing posters. Even the teaser of Tubelight, which had a few children singing in chorus, ‘Jal Jaa’ back got us excited about the plot of the movie.

Tubelight marks the third collaboration between Salman and Kabir. They have earlier delivered blockbusters like Ek Tha Tiger and Bajrangi Bhaijaan. The expectations are huge from Tubelight. It would be interesting to see if the two be able to recreate the same again.