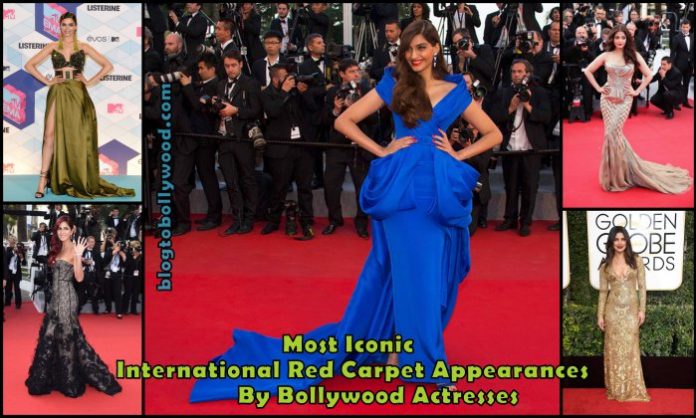 So every time we see spot the stars at a red carpet event, we have in our heads our own list of best and worst dressed celebs. Indian Award shows and Film Festivals have always been a rage but when it comes to an international red carpet event, there is a little extra push on the fashion front. Leading ladies from all over the globe are present, everybody looking their spectacular best. Our Bollywood actresses too leave no stone unturned in grabbing the spotlight at these events with their haute couture. Here we present to you a list of most iconic international red carpet appearances by Bollywood actresses.

Katrina Kaif debuted at the Cannes Film Festival in 2015 with this Oscar de la Renta gown. The gown which had a nude inlay and floral woollen like embellishments was similar to Aishwarya’s gown from one of her previous Cannes looks. Katrina walked the red carpet as the brand ambassador of L’Oreal Paris cosmetic brand.

On the day 2 of the 68th Cannes Film Festival in 2015, Katrina chose a flattering red full sleeved Elie Saab gown. Katrina attended the show for the premiere of the film Mad Max: Fury Road. Poised and beautiful, Katrina’s gown had red lace detailing along with a thin belt. She was also seen sporting red hair throughout her Cannes appearances.

Now that’s one dress that totally became the talk of the town. Priyanka Chopra made her debut at the Oscars last year by presenting an award and her dress became Google’s most searched outfit. Priyanka looked absolutely stunning in a Lebanese designer Zuhair Murad gown. White strapless gown along with a classic silver belt and to top it all, her 50 carat diamond earrings completed her look.

The very recent Golden Globe Awards 2017 had Bollywood biggies Priyanka Chopra and Deepika Padukone on the red carpet. Priyanka was seen in a fitted golden sequined Ralph Lauren gown and a diamond neckpiece by Lorraine Schwartz. She also sported oxblood lips. This look was not as widely appreciated as that of her Oscar’s but we know, the desi girl-gone-global is surely winning hearts.

Sonam Kapoor in Ralph and Russo

If there is one actress we all need to take fashion lessons from, it is Sonam Kapoor. Sonam has always managed to do something extraordinary with her clothes and her appearances at the Cannes Film Festival are the ones you can never miss. Sonam looked like an angel in a white Ralph and Russo cape gown. Dramatic eyes and a white choker added to her look.

Sonam Kapoor in Ralph and Russo

Another amusing collection from Sonam’s international red carpet appearances. Sonam made heads turn at the 68th Annual Cannes Film Festival in a delightful Ralph and Russo gown. With this unusual twist in her blue gown, she is definitely goals! Sonam too walked the red carpet as the brand ambassador of L’Oreal.

There’s a plethora of Aishwarya’s international red carpet looks as she has been attending the Cannes Film Festival from the past 15 years. She has had many hits and misses on the Cannes red carpet with everything from sarees to gowns and has been accompanied by her husband and daughter. At the 66th Cannes Film Festival, Aishwarya attended the screening of Blood Ties in a royal floor length Anarkali by Anu Jani and Sandeep Khosla.

Aishwarya looked ravishing in a golden strapless Roberto Cavalli gown at Cannes 2013. The mermaid fit gown and Aishwarya’s gorgeous looks caught everyone’s attention making it one of her top appearances on the red carpet.

Who do you think has the most influential international red carpet wardrobe?