Cinema halls across the country were closed in March 2020 due to the coronavirus pandemic. As per estimates, the Bollywood industry suffered losses of more than Rs 15000 crore in the last two years due to shutdown. While some movies opted for direct digital release, big movies waited for the situation to settle down. 2021 and 2022 will be critical years for Bollywood as these big movies will finally see the light of the day. Take a look at the most anticipated Bollywood movies of 2021 and 2022.

Probably the most awaited Bollywood movie of 2021, Sooryavanshi, created a huge pre-release buzz before its scheduled release on Mar 24, 2020. It is the fourth movie of Rohit Shetty’s cop universe. Starring Akshay Kumar and Katrina Kaif in lead roles, Sooryavanshi has cameos by Ranveer Singh and Ajay Devgn. Sooryavanshi will release in cinemas on Nov 5, 2021.

It is an official spiritual sequel to the 2018 movie Satyameva Jayate. It stars John Abraham in a double role alongside Divya Khosla Kumar, Rajeev Pillai and Anup Soni. Satyameva Jayate 2 will release on Nov 26, 2021, and will clash with Salman Khan’s Antim – The Final Truth.

Starring Allu Arjun, Fahad Faasil and Rashmika Mandanna in lead roles, Pushpa will release in Tamil, Hindi, Malayalam and Kannada languages. The movie’s plot is based on the red sanders smuggling in the Seshachalam Hills of the Rayalaseema region of Andhra Pradesh. Pushpa: The Rise – Part 1 will release on Dec 17, 2021.

One of the most awaited movies worldwide, RRR stars N. T. Rama Rao Jr., Ram Charan,  Ajay Devgn and Alia Bhatt in lead roles. The movie is a fictional account of two Indian revolutionaries, Alluri Sitarama Raju (Charan) and Komaram Bheem (Rama Rao), who fought against the British Raj and Nizam of Hyderabad respectively. Made in a massive budget of Rs 400 crore, RRR will hit the big screens worldwide on Jan 7, 2022.

After the blockbuster success of Kabir Singh, all eyes will be on Shahid Kapoor as he will be next seen in the sports drama movie Jersey. The movie is a remake of the Telugu movie of the same name. The film will now release on Dec 31, 2021.

After Raanjhanaa, Anand L Rai and Dhanush are collaborating for a romantic drama. It also stars Akshay Kumar and Sara Ali Khan. Produced by T-Series, Colour Yellow Productions, and Cape of Good Films, the movie will release on Netflix in the first half of 2022.

Backed by Yash Raj Films, Prithviraj is one of the most expensive Bollywood movies of 2021. The period drama stars Akshay Kumar in the lead role of ruler Prithviraj Chauhan. Miss World 2017 Manushi Chhillar makes her Bollywood debut. She will play playing Chauhan’s love interest and beloved wife Sanyogita. The movie is scheduled for Jan 22, 2022 release.

Shah Rukh Khan will return to silver screens after a hiatus of three years. His next, tentatively titled Pathan, is an action-thriller. Directed by Siddharth Anand, it also stars John Abraham and Deepika Padukone. The release date is still unknown but we are expecting it to release around Diwali in 2022.

Starring Ranbir Kapoor, Alia Bhatt, Amitabh Bachchan, Mouni Roy, Nagarjuna, and Dimple Kapadia, Brahmastra has been in the making for a long time now. Ayan Mukerji’s fantasy drama film has been postponed multiple times is expected to release in theatres in 2022.

Starring Aamir Khan and Kareena Kapoor in lead roles, Laal Singh Chaddha is an official Hindi remake of the Tom Hanks cult classic Forrest Gump. It was initially scheduled for Christmas 2021 release but got delayed due to the pandemic. Aamir Khan starrer will release in cinemas on Feb 14, 2022.

Starring Ajay Devgn and Priyamani, Maidaan will arrive in theatres on June 3, 2022. Directed by Amit Ravindernath Sharma, Maidaan is a biographical sports drama movie starring Devgn in the role of Syed Abdul Rahim, who served as a coach and manager of the Indian football team in the 1950s.

Starring Prabhas and Pooja Hegde, Radhe Shyam is a period romance drama movie. Shot on a big scale, it will release in Telugu and Hindi on Jan 14, 2022. Fans are already talking about romantic chemistry between the lead pair.

Akshay Kumar reunites with Farhad Samji for an action-comedy movie titled Bachchan Pandey. Despite rumours that it is a remake of the Tamil movie Jigarthanda, makers are claiming it to be an original script. Starring Kriti Sanon, Jacqueline, Arshad Warsi, Pankaj Tripathi, Bachchan Pandey will release on Mar 4, 2022.

Starring Ranbir Kapoor, Vaani Kapoor, and Sanjay Dutt, the period drama has been delayed multiple times. The movie is set in the 1800s and tells the story of a dacoit tribe fighting against the British. Karan Malhotra, who has previously directed movies like Agneepath and Brothers is helming the project. Shamshera will release on Mar 18, 2022.

One of the biggest releases of 2022, it is a sequel to the 2018 movie K.G.F: Chapter 1. The expectations are huge from this action thriller as the first movie emerged as a huge hit and garnered an unbelievable response from the viewers. The movie will release on Apr 14, 2022, in Kannada along with the dubbed versions of Telugu, Hindi, Tamil and Malayalam languages.

Prabhas has established himself as the biggest Indian actor thanks to the success of Baahubali. He has joined hands with KGF director Prasanth Neel for an action thriller titled Salaar. The movie will release in Telugu, Hindi, Kannada, Tamil and Malayalam. It will hit the big screens on Apr 14, 2022. However, we may see a change in the release date as KGF: Chapter 2 is scheduled to release on the same day.

Tiger Shroff made his Bollywood debut with a romantic action movie Heropanti in 2014. Now, he is coming to big screens with its sequel. Directed by Ahmed Khan, Heropanti 2 also stars Nawazuddin Siddiqui and Tara Sutaria. It will release on Apr 29, 2022.

After the success of Tanhaji, director Om Raut is working on a historical movie based on the Hindu epic Ramayana. The movie stars Prabhas as Rama, Saif Ali Khan as Lankesh, Kriti Sanon as Sita and Sunny Singh as Lakshmana. Adipurush will hit the big screens on Aug 11, 2022.

Vikram Vedha is a remake of a 2017 Tamil thriller movie of the same name. While the original had R Madhavan and Vijay Sethupati in lead roles, the Hindi remake stars Saif Ali Khan and Hrithik Roshan. Directed by Pushkar–Gayathri, the movie will release on Sep 30, 2022.

Hero walking on to set after 2 years. I am walking in front of him .
Wait for it. #vikramvedha #teamisasliheroes

So, these are the most anticipated Bollywood movies of 2021 and 2022. Hope you liked our list. If you have a suggestion, please drop a comment. 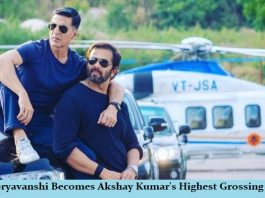