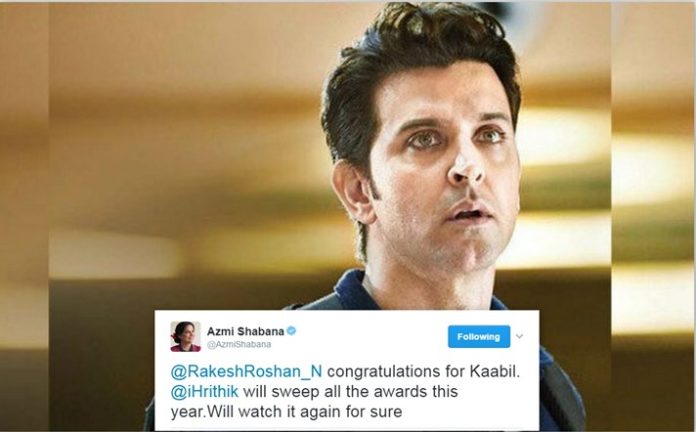 Handsome hunk Hrithik Roshan held a private screening in Mumbai for his close friends and also ex-wife Sussane Khan of his soon-to-be out movie ‘Kaabil’ and the celebs just can’t stop praising Hrithik and his fabulous performance as a blind man in this suspense thriller. The movie has received tremendous response from celebs and it seems that we are in for a big clash when it will clash with Raees on 25 Jan 2017. Here the celeb reviews of ‘Kaabil’.

Guddu/Sanjay/Duggu/Yami/Sudeep/Resul-"Kabil" Winner all the way. Thrilling,chilling,entertaining. Congratulations all concerned. Loved it!

Kaabil is engrossing,Kaabil is thrilling &captures its audience attentn.My 14 yr old who is not in2 films so much culd nt stop raving abt it

You will clap, cry, whistle, marvel at the brilliance of #Kaabil and the performance of @iHrithik He rips Ure heart out of your body!

@RakeshRoshan_N congratulations for Kaabil. @iHrithik will sweep all the awards this year.Will watch it again for sure

It's been an emotional evening for me!Thank you team #kaabil ❤️ This is now my favourite @iHrithik Film. Don't miss 2017 first Superhit ❤️ pic.twitter.com/eDX11aiISK

Kaabil is directed by Sanjay Gupta, written by Vijay Kumar Mishra, produced by Rakesh Roshan under his banner FilmKraft Productions. It features a love affair between two blind people, played by Hrithik Roshan and Yami Gautam. Music is composed by Rajesh Roshan. It is all set to release on 25 January 2017. (Read: Raees Vs Kaabil In-Depth Analysis)