This is going to be an exciting weekend for movie buffs. Several good movies are making their way to big screens. Here’s a look at movies releasing on July 15 in theatres. The list includes Hindi, English, Tamil, and Telugu movies.

The Hindi remake of the 2020 Telugu action thriller of the same name stars Rajkumar Rao and Sanya Malhotra in lead roles. Sailesh Kolanu who helmed the original has also directed the Hindi remake.

The movie is a biopic of former Test and ODI captain of the India women’s national cricket team, Mithali Raj. It chronicles the ups and downs and moments of glory of Mithali’s life. Directed by Srijit Mukherji, it stars Taapsee Pannu and Vijay Raaz in lead roles.

Ram Gopal Verma’s long-delayed movie Ladki – Dragon Girl is finally getting a release. As per Ramu, it is one of his costliest projects to date. It is said to be India’s first martial arts film.

The Warriorr is an action entertainer starring Ram Pothineni, Aadhi Pinisetty, Krithi Shetty, Akshara Gowda, and Nadhiya Moidu. Directed by N. Lingusamy, is shot in both Tamil and Telugu languages. It is a perfect masala movie for action lovers.

Judaa Hoke Bhi is a supernatural-horror romantic drama written by Mahesh Bhatt and directed by Vikram Bhatt. The movie stars Akshay Oberoi and Aindrita Ray in the lead roles and Meherzan Mazda in the supporting role.

Gautham Ramachandran’s Gargi is a hard-hitting courtroom drama that put the light on several important issues bedeviling society, like child sexual abuse and the humiliation that the families of those accused of heinous crimes like rape have to undergo. Sai Pallavi delivers one of the best performances of her career. 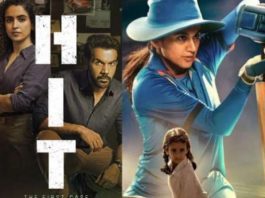