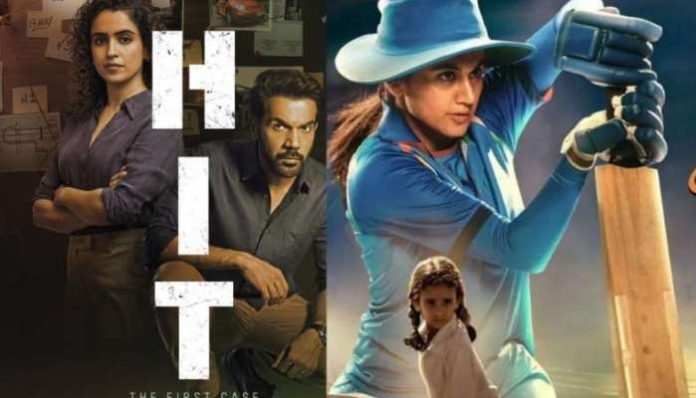 The poor phase for Bollywood continues as two more movies have joined the list of evergrowing flop movies of the year. The two new releases, Shabaash Mithu & Hit: The First Case, have failed to pull audiences to the theatres despite good critics’ reviews. Both movies have failed to collectively earn Rs 10 Crore in their opening weekend. Let’s have a look at Shabaash Mithu & Hit: The First Case first weekend box office collection report.

Starring Rajkummar Rao and Sanya Malhotra, Hit: The First Case is directed by Sailesh Kolanu. It is an official Hindi remake of a 2020 Telugu language movie of the same name.

Opened to decent reviews, Hit: The First Case collected Rs 1.35 Crore on its first day. Its collection recorded a decent jump on Saturday and Sunday. On Saturday, the Rajkummar Rao starrer collected Rs 2.1 Crore. On Sunday, the movie witnessed minimal growth and earned around Rs 2.3 Crore.

So, the first-weekend box office collection of Hit: The First Case is less than Rs 6 Crore. With no chances of revival, it would wrap up its journey under Rs 15 Crore. Another box office failure for Rajkummar Rao.

The other theatrical release of the week is Taapsee Pannu’s Shabaash Mithu. The movie showcases the rise of women’s cricket in India through the life of former Indian’s women cricket team captain Mithali Raj.

Taapsee Pannu has garnered rave reviews from critics for his performance but the movie is a total wash-out at the box office. Directed by Srijit Mukherji, Shabaash Mithu had a dismal start. It earned Rs 0.4 Crore on Friday. On Day 2, the movie saw a small jump in numbers, collecting around Rs 0.65 Crore, taking its tally to Rs 1 Crore mark. On Sunday, the sports drama remained flat and minted around Rs 0.6 Crore.

The first-weekend box office collection of Shabaash Mithu is less than Rs 2 Crore. A total washout at the box office. It will even struggle to cross Rs 5 Crore in its lifetime. Another epic disaster of 2022 after Dhaakad.