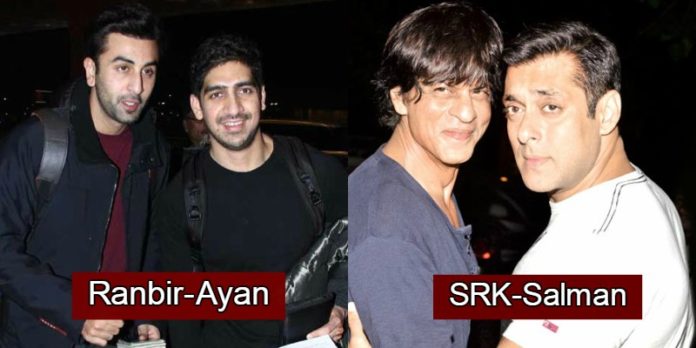 It is well-known that in Bollywood, friendship doesn’t survive much. However, some of the Bollywood buddies have stayed with each other through all the thick and thin. In fact, their friendship seems to be evolving over the years. Let’s have a look at top 10 real life best friends of Bollywood. The Khan friendship is going stronger since the days they have worked together in Andaaz Apna Apna. Salman has always been seen saying in his interviews that Aamir Khan is No.1 and nobody else can take the spot. Salman and Aamir have been spotted together at many events including the screening of mega blockbuster ‘3 Idiots’. The Khans also promote each others films on Twitter. Salman took advantage of his reality TV show ‘Bigg Boss’ to promote Aamir’s ‘Dhoom 3’ while Aamir promoted Salman’s ‘Jai Ho’ on Twitter. It came as a shock when Aamir tweeted a pic where The Khans are urinating together. However, fans were delighted with the growing friendship between these two.

Their friendship started on the sets of super-hit ‘Dhoom’. Since then, the actors have been seen riding bikes on the streets of Mumbai late nights and hanging out everywhere else. Their next film together ‘Dostana’ was a treat to the fans with their bromance. They have been best of the buddies for last 10 years now and are all set to rock again in Dostana 2. This friendship saw a lot of rough patch but is still intact due to their dedication. The actors have worked in many films and now together own an IPL team. Juhi says, “I think Shahrukh and I have remained friends because we stopped being business partners. I realise it’s impossible to mix business with friendship. Our relationship did go through a rough patch. When I realized our friendship was suffering because of the partnership I chose to keep the friendship and let the business partnership go. Today after a long gap we’re again together in the IPL”

These Bollywood buddies seem to be the oldest. Sanjay and Salman revealed they know each other since their teenage years. The duo has done plenty of films together and even hosted a season of reality show ‘Bigg Boss’. Salman also visits Sanjay’s wife Manyaata every now and then as Sanjay is imprisoned. The duo shares great affection and brotherhood.

The latest B-town buddies are Arjun and Ranveer who hits off on the sets of ‘Gunday‘. Their bromance is the most talked about these days. They sport almost similar looks and every event they attend end up pulling weird faces together and joking on each other.

This duo are the most stylish buddies of B-town. Sonam and Jackie take fashion tips from each other and go shopping together whenever possible. They appear on red carpet hand in hand. Jacqueline has even said in an interview that Sonam is her 3-am-friend.

Their friendship is no secret. The duo has been buddies since Kareena was at the earliest stage of her career. The Kapoor Kudi was even spotted as Amrita’s bridesmaid and was seen dancing at her wedding. Amrita always attends shows when Kareena walks the ramp and is seen cheering Bebo. The actors have also been spotted at various malls in Mumbai shopping together.

This friendship needs no introduction. SRK is always Karan’s first choice in his films and Karan always opens the first episode of his talk show Koffee with Karan by bringing SRK on board. The duo seek advice from each others in problems. Karan also shares deep friendship with Khan’s wife Gauri too and is always spotted at SRK’s house events. Their friendship ignited with Wake up Sid. The duo shares a great rapport and are always seen hanging out. Ranbir revealed that he takes advice from Ayan on his personal life. The duo has given two hit films together as director-actor combo and is now working on the third. Ajay and Rohit are the best of friends since the time when Rohit wasn’t a big name in the industry. It was in 2003 when Rohit made his directional debut with Zameen with Ajay and Abhishek Bachchan. Since then the duo has delivered blockbusters like All The Best, Singham and Golmaal series. This Jodi is all set to rock again this Independence day with Singham Returns.

Who according to you is Yaarion Ka Yaar of Bollywood? Share your views with us in the comments section. Happy Friendship day from Blog to Bollywood team.