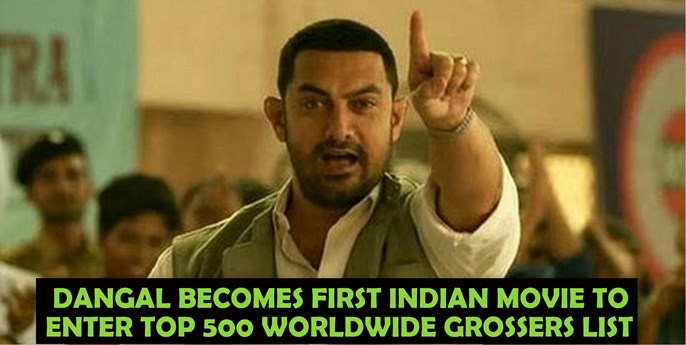 Aamir Khan’s Dangal has achieved something which other Bollywood movies can only dream about. After its release in China, Dangal is setting new benchmarks at the worldwide box office. The movie has reached yet another milestone which has certainly taken Indian cinema to a new level on the global canvas. Aamir Khan’s

Aamir Khan’s Dangal has become the first Indian movie to make it to the list of top 500 highest grossing movies of the world. This is an incredible feat as no other Bollywood movie has even made it to the top 1000.

The worldwide collection of Dangal currently stands at $260 million. The movie has around 60% of the total earning i.e $135 million from China alone. The movie is simply unstoppable at the Chinese box office as it has already grossed 930 crores and is now looking to cross 1000 crores.

The top 500 worldwide grosser list has been dominated by big Hollywood movies. Hollywood movies have huge releases across the world and this is one of the prime reasons they make huge money. It would be difficult for Dangal to be in top 500 for a long time as some big Hollywood movies will topple it. Talking about the top worldwide grossing movies, Avatar is at the first position with the collection of $2788 million followed by Titanic ($2186.8 million) and Star Wars ($2,068.2 million).