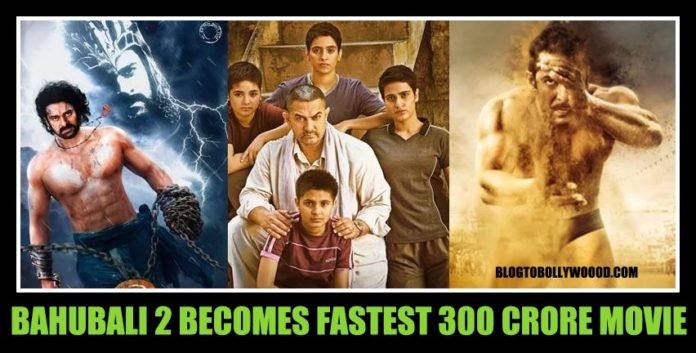 SS Rajamouli’s magnum opus Bahubali 2 is on a record-breaking streak from the first day. The movie is simply unstoppable and is creating new box office records every day. Yesterday only, it became the first Indian movie to gross 1000 crores mark worldwide. Even on the 10th day of its release, the movie has refused to slow down and created yet another record at the domestic box office.

Bahubali 2 has become the first south Indian movie to cross 300 crores in Hindi version. What’s more commanding is that the movie has achieved this milestone in record time. Bahubali 2 has beaten Dangal, PK and Bajrangi Bhaijaan to become the fastest 300 Crore grosser.

Bahubali 2 has achieved something unthinkable and unbelievable. Despite being a dubbed movie, it has crossed 300 crores in a record time of 10 days. What makes Bahubali 2 more special is that it has achieved this incredible feat without any holiday. While Dangal and PK were released during Christmas season, Salman Khan’s Sultan and PK were released during Eid. Let’s have a look at the 300 crore grossers of Bollywood.