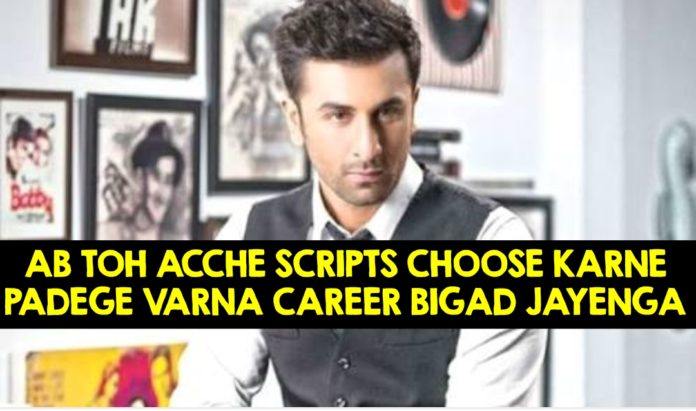 Last few years have not been good for Ranbir Kapoor as his last few releases failed at Box-office. Apart from ADHM, his other films like Jagga Jasoos, Bombay Velvet and Roy tanked at box office.

After the success of YJHD, it was expected that India will see a new superstar in Ranbir Kapoor. However, that didn’t happen. Fortunes turned against Ranbir as his films started falling apart at the box office. In the last five years, six Ranbir films have tanked at the box office. His only hit was ADHM released in 2016.

But now among all youngsters, Ranbir Kapoor has best projects in his bucket. Sanju which is produced and directed by Rajkumar Hirani is all set to release on June 29. Ranbir Kapoor will be seen playing the role of Sanjay Dutt in this biographical drama.

Sanju has created a lot of buzz because of its star cast, its content and it is expected that it will have a good run at Box-office. Sanju is expected to be one of those films that will bring the best of Ranbir Kapoor.

Ranbir Kapoor then will feature in ‘Brahmastra’ which is all set to release on Independence Day,  2019. According to reports, Brahmastra is a trilogy and will be released in three parts. Other than Ranbir Kapoor, Brahmastra has talented star cast in Amitabh Bachchan, Alia Bhatt and Mouni Roy. Ayaan and Ranbir together have delivered films like ‘Wake Up Sid’ and ‘Yeh Jawaani Hai Deewani’. So, the expectations are huge from Bhahmastra.

After the success of ‘Sonu Ke Titu Ki Sweety’, Luv Ranjan’s next directorial will have Ranbir Kapoor and Ajay Devgn in lead roles. Official date of release has not been announced yet but according to reports, film is scheduled to release in 2019.

With the commercial projects in hand, Ranbir Kapoor will certainly make a good comeback.