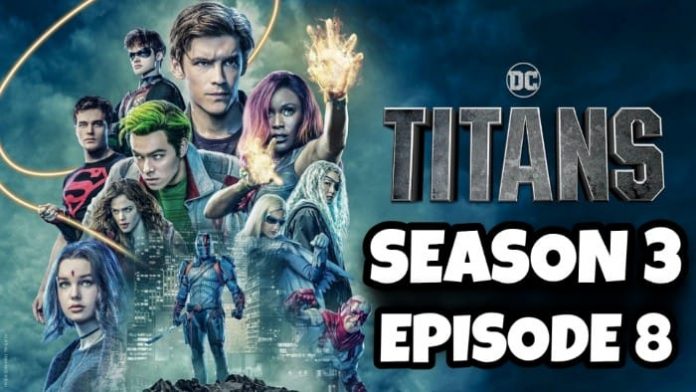 Titans Season 3 Episode 8: We are through the halfway mark of the third season of ‘Titans’ and fans are now getting restless for more.

DC’s superhero show Titans is effectively halfway through its third season run. Unlike most superhero series, Titans showcases dark and intense drama. The third season of the series has been an adventurous ride for the fans. It’s been the darkest season of all as one of their team heroes, Jason Todd, returned from the dead and became the bloodthirsty Red Hood. Episode 7 of the third season shows Titans finally comes together as a team. All the heroes of the group tried their best to locate Scarecrow. The group manages to locate Scarecrow’s base and attack it. However, he flees with Jason. What will happen next? The fans are super excited for the next episode. Here’s everything you need to know about Titans Season 3 Episode 8.

In episode 7 titled 51%, we saw Gotham City in danger as Jason distributes Scarecrow’s drug. Scarecrow praises Jason but secretly drugs him after realizing that he still fears Dick. Dick persuades Barbara to use the Oracle computer to locate Scarecrow. Dick and Conner travel to a location they receive from the system. However, Barbara deactivates Oracle when Scarecrow hacks it.

Meanwhile, Kory and Blackfire visit mob boss Valeska Nox, who offers to give up Crane’s location if they reunite her with her son Michael. However, she kills his son for being an FBI informant, in turn, Kory kills Nox.

Nevertheless, Kory and Blackfire help Dick finds out Scarecrow’s location from one of Nox’s henchmen. The Titans destroy the drug plant as Scarecrow escapes with Jason. The episode ends with Gar meeting with Molly in hopes of redeeming Jason. At last, Dick and Barbara resume their relationship. Gar meets Molly in the hope to help Jason.

Titans Season 3 Episode 8: What to expect?

The 8th episode of Titans season 3 is reportedly titled ‘Home.’ It will focus on the events after Titans destroy Scarecrow’s drug operation. It would be interesting to see how Scarecrow reacts? he is expected to make some desperate efforts. Expect Jason to be freed who is still under the influence of Scarecrow’s drug.

Where to Watch Titans Season 3 Online?

Titans is HBO Max exclusive show in the United States. Titans’ season 3 episode 8 will be available to stream on HBO Max on Sep 16, 2021, at 3:00 am EST. HBO Max subscribers can watch the series at no additional cost. Viewers can also watch the series on Hulu,  Amazon Prime Video, Spectrum, YouTubeTV, and DirecTV by subscribing to the HBO Max add-on through these services.

What Titans is all about?

DC’s superhero show Titans is a live-action series based on the Teen Titans. It premiered in 2018 followed by the second season in 2019. The third season landed on HBO Max on Aug 12, 2021. The series portrays a group of young heroes who join forces in their fight against evil.

Insecure Season 6: Will there be a season 6 on HBO Max?

When Will ‘Succession’ Season 4 Premiere on HBO and HBO Max?