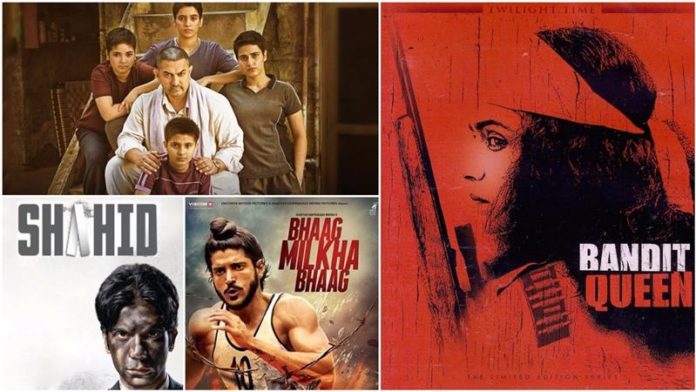 Best Bollywood Biopics: From ‘The Legend Of Bhagat Singh’ to ‘Dangal’, let’s have a look at the best biopics of Bollywood.

Biopics has become a growing trend in Bollywood these days. With MS Dhoni’s biopic just around the corner, one might think that this is a recent trend only. But what you may not know is that this has been a long-used trend in Indian Cinema and has also given us some of the finest movies ever. Here is a list of the 10 best Bollywood biopics till date:

Based on Sardar Vallabhbhai Patel, one of India’s greatest freedom fighters, the movie was directed by Ketan Mehta. Paresh Rawal did a tremendous job at playing Sardar Patel and the movie garnered a lot of praise.

Shekhar Kapur‘s movie was based on the life of Phoolan Devi, the infamous bandit and later the Member of Parliament. Seema Biswas played the lead role and the film won the National Film Award for Best Feature Film in Hindi, Filmfare Critics Award for Best Movie and Best Direction for that year. The Legend of Bhagat Singh is a biopic on Bhagat Singh, a freedom fighter who fought for Indian independence. Directed by Rajkumar Santosh, it is considered as one of the best films of Ajay Devgn. The movie went on to win two National Film Awards, including the National Film Award for Best Feature Film in Hindi, and three Filmfare Awards, including the Filmfare Critics Award for Best Movie.

One of the many attempts made on Mahatma Gandhi’s life, Gandhi, My Father explored the troubled relationship between Mahatma Gandhi and his son Harilal Gandhi. It is based on the biography of Harilal Gandhi, titled as Harilal Gandhi: A Life by Chandulal Bhagubhai Dalal. Darshan Jariwala played the role of Gandhi while Akshaye Khanna played Harilal in this directional by Feroz Abbas Khan.

Another Ketan Mehta movie in the list. This bilingual film was based on the life of the 19th-century Indian painter Raja Ravi Varma. It is an adaptation of the biographical novel Raja Ravi Varma authored by the Marathi writer Ranjit Desai with Randeep Hooda as the lead.

One of Irrfan‘s best movies, it is based on the true story of the athlete Paan Singh Tomar, a soldier in the Indian Army, gold medalist at the Indian National Games but is forced to become a notorious bandit. The movie was directed by Tigmanshu Dhulia and was a super-hit critically and financially.

The Dirty Picture is another biographical drama inspired by the life of Silk Smitha, a South Indian actress noted for her steamy roles. Vidya Balan played the lead role with Naseeruddin Shah and Emraan Hashmi in the movie. This Milan Luthria directional won three National Film Awards including Best Actress, three Filmfare Awards and six Screen Awards including Best Picture and Best Director.

Hansal Mehta‘s Shahid is based on the life of lawyer and human rights activist Shahid Azmi, who was assassinated in 2010 in Mumbai. The movie had Rajkummar Rao in the lead and won the National Film Award for Best Actor and Best Director at the 61st National Film Awards ceremony.

Rakeysh Omprakash Mehra directed this movie based on the life of Milkha Singh, with a script written by Prasoon Joshi. Farhan Akhtar played the role of the Indian athlete who was a national champion runner and an Olympian. The movie was inspired by Singh’s autobiography The Race of My Life.

Directed by Omung Kumar, Mary Kom is based on the story and struggle of Indian boxer Mary Kom (portrayed by Priyanka Chopra), who in spite of many problems, went on to follow her dream and becoming the first Indian woman boxer to get a Gold Medal in the Asian Games in 2014.

Neerja revolved around the hijacking of Pan Am Flight 73 in Karachi, Pakistan and was based on the life of flight attendant Neerja Bhanot, who saved many lives but lost her own. Directed by Ram Madhvani, the movie had Sonam Kapoor in the lead.

Neeraj Pandey brought the complete story of the most successful Indian Cricket Captian MS Dhoni into life with this biopic. The film chronicled the life of Dhoni from a very young age and compiled all the life events that finally made him the star of Indian cricket. Sushant Singh Rajput did a great job in playing reel life Dhoni.

Aamir Khan‘s Dangal was the latest addition to this list when director Nitesh Tiwari took the whole country by storm with the amazing story of Mahavir Singh Phogat, his daughters Geeta Phogat and Babita Phogat. Dangal is one of the most inspiring biopics of Bollywood without a doubt.

Which is your favorite Bollywood biopic among these? Share your views with us in the comments section. Do let us know, if we missed out some name.