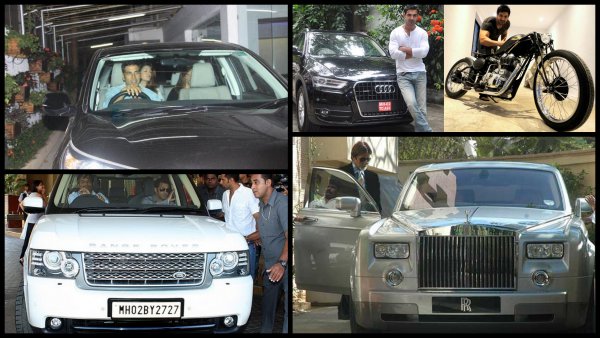 Bollywood Stars And Their Luxury Cars: Our Bollywood stars own some of the most expensive cars in the world. Let’s have a look.

Bollywood stars are appreciated a lot for their impressive work on screen, but they are often more well known for their extravagant purchases. With expendable incomes, these stars aren’t shy when it comes to showing off their expensive cars. Let’s have a look at the list of Bollywood stars and their luxury cars. We can only dream of them.

When it comes to being a car enthusiast, Shahrukh Khan is clearly on the top. He loves collecting super cars, other than being a gadget freak. Shahrukh Khan’s net worth is estimated to be $600 million, which allows him to drive some of the most luxurious cars in the world. His collection includes Rolls Royce Drophead Coupé, Rolls Royce Phantom, Land Cruiser, BMW 7 & 6 Series, BMW Convertible, Audi A6, Bentley Continental GT, Mitsubishi Pajero Sport.

Salman Khan comes high up in this order due to an enviable collection of both cars and bikes. He has a huge collection of cars including BMW X6, BMW M5, Audi R8, Audi Q7, Audi RS7, Land Rover, Range Rover Vogue, Lexus LX570  Mercedes-Benz S-Class and He owns a limited edition blue Suzuki Intruder M1800RZ limited edition, priced at Rs 15 lakh. He also owns a Suzuki Hayabusa worth Rs 13.5 lakh.

The shahenshah owns over 20 cars out of which around a dozen are luxury cars. He is often seen riding in his Rolls Royce Phantom that has been gifted to him by close friend Vidhu Vinod Chopra. His other fleet of cars comprises of Bentley Continental GT, Range Rover, Lexus LX470, a Mercedes SL500, a Porsche Cayman S, Mercedes-Benz, BMW X5, BMW 7 Series, a Toyota Land Cruiser and a Mercedes S320.

Sanjay Dutt is also one of the many car fanatics of Bollywood. His range of cars includes a Ferrari 599, a two-seater Audi R8, an Audi Q7, Audi A8, a Lexus SUV, a Mercedes-Benz M-class, a Porsche SUV, Toyota Land Cruiser, a BMW 7-Series and a Rolls Royce Ghost. Not only this he also owns a Harley-Davidson Fat Boy. He was also gifted a custom-made Italian bike worth 15 lakhs by Shahrukh Khan for doing a cameo in Ra One.

John’s bike collection is larger than most. Recently he got a custom bike from Rajputana Limelight, called as the Light foot. This has been designed exactly as per John’s height, weight and stance, inspired by the design of the 1910 American Board Track Racer. Besides, John also owns the Suzuki GSX-1300R which costs around Rs. 16.45 lakh, Yamaha VMax and Yamaha YZF-R1. Talking about cars, he owns an Audi Q7 and a Maruti Gypsy, he has gifted an Audi Q3 to his sister-in-law. His favourite one is the black Lamborghini Gallardo, finished in Nero Noctis exteriors and Nero Perseus interior, worth 2 crores!

The Khiladi Akshay Kumar loves driving around in his Porsche Cayenne. Although he has a huge collection of cars including Mercedes Benz, Ferrari and Nissan. Akshay gifted the British luxury car Bentley to his wife. he is often seen going to movie sets or with family in his beautiful Honda CRV car. Also, John Abraham gifted him a Harley Davidson after the success of Housefull 2.

The dark horse of Bollywood has an amazing car collection comprising of a Ferrari, Maserati Quattroporte, Mercedes Z-class, Range Rover Vogue, BMW Z4, a modified Toyota Celica and the vintage 1967 car used in his Bollywood flick, Once Upon a Time in Mumbai. He gifted his wife Kajol a white Audi Q7 for her birthday. He also owns a 6 seater aircraft for his personal trips and promotions. Impressive?

Hrithik Roshan’s garage comprises of a Mercedes-Benz S-Class, White BMW, Porsche Cayenne, Jaguar X and Range Rover sport. Having splurged approximately Rs. 2.4 crore on the Mercedes-Benz sedan, the actor can be seen proudly driving around in his electric blue enchantment, boasting its swanky look and make.