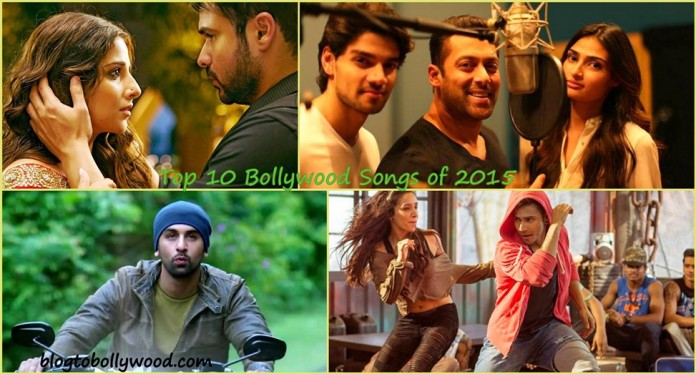 With just one month left in 2015, we think it’s time to rewind and refresh our playlists. We had a lot of party numbers, romantic songs, sad songs  this year. Let’s take a look at the Top 10 Bollywood Songs of 2015 So Far-

Afghan Jalebi (Ya Baba) is one such song which really annoys you initially but as you keep on listening to it you get addicted. Pakistani Singer Asrar sang this song beautifully which was composed by Pritam.

The title track of Khamoshiyan sung by Arijit Singh is a lovely composition. With the love-filled lyrics, the song is quite a treat. Jeet Ganguly created this spell-binding number with full charm.

Composed and sung by Ankit Tiwari, Tu Hai Ki Nahi is a chic love ballad with a beautiful composition and lovely lyrics. The whistle playing throughout is the best part of the song.

Meet Bros Anjjan and Kanika Kapoor created Chittiyaan Kalaiyaan which is pleasant to hear and leaves a good impression. Though the song reminds us a bit of ‘Baby Doll’, the song was still a major chartbuster.

Atif Aslam gets us hooked from the first line itself of Jeena Jeena. The slow romantic number is really addictive with amazing lyrics by Priya Saraiya and Dinesh Vijan.

Salman Khan created major magic with his voice in Main Hoon Hero Tera. We are sure the movie didn’t do as well as this single song did. An obvious chart-buster!

Banno is a re-rendering of a folk Punjabi number with the same name. The composers Tanishq and Vayu did a superb job and voices of Brijesh Shandllya and Swati Sharma complement the song. The modern touch and the techno-bhangra beats are really energetic.

Another brilliant song by Sachin-Jigar, Sun Saathiya is a love ballad crooned by Priya Saraiya and joined later by Divya Kumar. The song strikes a chord in the listeners heart.

Arijit Singh is at his best in Hamari Adhuri Kahani. The soothness of this song takes you to another world.

Which is your favorite among the Top 10 Bollywood Songs of 2015? Share with us in the comments section.