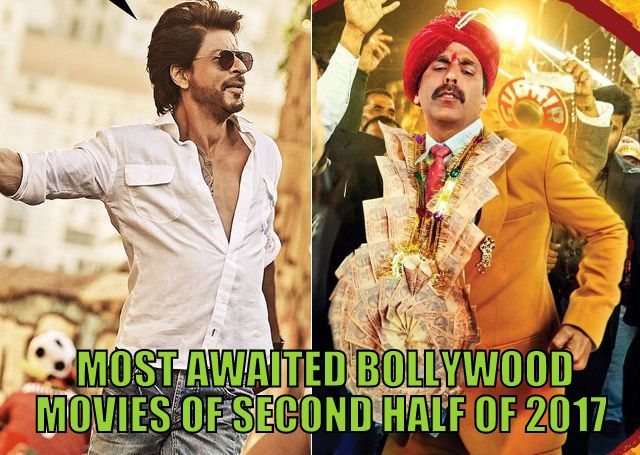 From ‘Tiger Zinda Hai’ to ‘Jab Harry Met Sejal’, a look at the most awaited Bollywood movies in the second half of 2017.

We belong to a country that loves movies and movie stars. We get so much obsessed with them that sometimes we tend to plan our weekends around them, this is what really makes the Bollywood industry so special. With half the year has passed, Bollywood has entertained us with some good movies like Bahubali 2, Jolly LLB 2, Raees, Hindi Medium, Badrinath Ki Dulhania etc. Here is a list of 5 most awaited Bollywood movies of 2017 with details.

These movies will ensure that the fans get the chance to experience the quality silver screen in the other half of 2017. Since making plans is an important aspect of our daily routines, here you will be reading about the most awaited Bollywood movies that are yet to be released in the second half of the year.

Sanjay Leela Bhansali is doing his comeback with another magnificent film, Padmavati in November 2017. The film is a period drama based on the story of Queen Padmavati’s real life. Deepika Padukone, Ranveer Singh, and Shahid Kapoor will play the lead roles. Being a Bhansali creation, fans are eagerly waiting for the release of this film. Sanjay Leela Bhansali is known for creating masterpieces through his movies; his last movies Ram-Leela and Bajirao Mastani were blockbusters that attracted millions of viewers to cinema halls.

After the huge success of Ek Tha Tiger, Salman Khan will again be seen in its sequel named as “Tiger Zinda Hai”. This time also Salman will be seen paired up with the gorgeous Katrina Kaif and they will be seen reprising their roles in this film. Directed by Sultan fame Abbas Ali Zafar, the movie will hit the theatres on 22 Dec 2017. Fans have been awaiting the sequel since its day of declaration. Fingers crossed, let’s see what Salman has in his box after the flop Tubelight.

Jab Harry Met Sejal is one of the most awaited Bollywood movies in the second half of 2017. Shahrukh will be seen on the big screen with Imtiaz Ali’s next, ‘Jab Harry Met Sejal’. He will be paired with the ever talented and beautiful, Anushka Sharma. They were last seen together in Anushka’s first film, “Rab Ne Bana Di Jodi” and again another film Jab Tak Hai Jaan. Shahrukh will be playing a role of tourist guide and Anushka as a Gujarati girl in the film. Let’s see how this story and the new concept reach the audience. The movie is slated for release on 4 Aug 2017. The film is a satirical comedy film to support the concept of Swachh Bharat Abhiyan, established by our prime minister, Narendra Modi. Akshay Kumar, Bhumi Pednekar and Anupam Kher will be seen in the lead roles. The film has really catchy music and song lyrics that people have loved and appreciated since its release. We are all eager to watch the comedy and brilliant performance of Akki and Bhumi in this outstanding movie that is going to be released on 11th of August 2017. Ajay Devgan will be seen in yet another comedy ensemble on this coming Diwali, Golmaal 4 along with his entire mad team which includes Parineeti Chopra, Tusshar Kapoor, Shreyas Talpade, Kunal Khemu, Tabu, Johnny Lever, Neil Nitin Mukesh, Arshad Warsi, and Prakash Raj. The film will be seen clashing along with another big banner film, secret superstar. The film will be co-produced by Rohit Shetty and Ajay Devgan and it is going to be the fourth instalment of the Golmaal franchise.

So, these are the most awaited Bollywood movies in the second half of 2017. For which movie are you waiting? Share your views with us in the comments section.