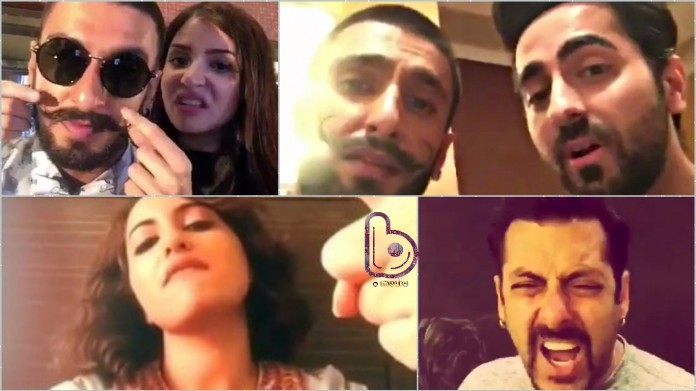 It was in 2015 itself when Amitabh Bachchan made his Debut in Dubsmash! But there were many more and we bring to you the Funniest Dubsmashes of 2015. Check them out!

She has a girl band as well!

I’ve always wanted my own girlband! #newyork #diaries with my #sisters 😜😜

2. Sonakshi Sinha Nothing could be funnier than Sonakshi doing a Dubsmash about one of her dad’s dialogues!

Found one of dads dialogues this is too cool!!!!! A #dubsmash a day, keeps the boredom away… And you entertained 😜 #badass #shotgun #mereapne #chhenu #dialoguebaazi #crazy #fun A video posted by Sonakshi Sinha (@aslisona) on May 15, 2015 at 10:16pm PDT

They did the Bhaag Arjun Bhaag bit in the most hilarious way possible!

4. Nargis Fakhri She loves us all!

He Dubsmashed his own Crime Master Gogo from Andaaz Apna Apna.

Holiday time pass with the one and ONLY 😁 #CrimeMasterGogo

10. Prem Ratan Dhan Payo Team They had to reply to the above Dubsmash, and they did by making two!

11. Ayushmann Khurrana His Manma Emotion Dubsmash is the best among all!

Thank u @ayushmannk made my day and a new step the #eyebrowsonfleek . Brilliant #manmaemotion @remodsouza new step alert A video posted by Varun Dhawan (@varundvn) on Dec 3, 2015 at 2:04am PST

This is how much they miss Arjun Kapoor!

@arjunkapoor a very special message for you Baba 😥 #BringArjunHome @ayushmannk A video posted by Ranveer Singh (@ranveersingh) on Dec 2, 2015 at 10:45am PST

Which one do you think is the funniest of them all?