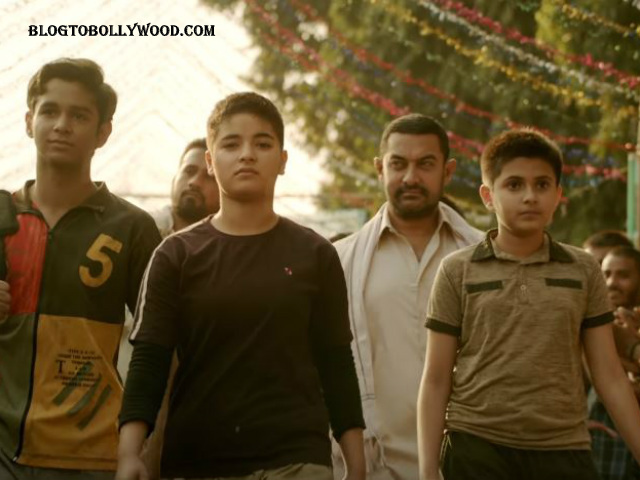 Just like every year, the Aamir Khan “year end” bomb at the box office is still remaining with ‘Dangal’. However, we have got enough promos and songs to keep ourselves satisfied while we wait for this mega release. There are 7 songs in the movie composed by Pritam Chakraborty and lyrics penned down by Amitabh Bhattacharya. All the music channels have been playing back to back songs from ‘Dangal’ and we are quite liking it! Here is our Dangal music review.

‘Haanikaarak Bapu’ is a funny and witty song about the daughters ranting how their father wants them to train hard for in order to become a wrestler and how he is persistent behind them, keeping eye on their diet and workout. In a way, it’s a song which transports us back to our childhood where we used to think of our fathers as a strict man devoid of any emotions. The girls say that their father is kind with others but is not so with them. They plead with him to stop being so demanding. The entire song has a sarcastic undertone to it. The music has a village kind of tunes and singers Sarwar Khan and Sartaz Khan have done complete justice to it.

Raftaar totally slays this song! A soft rap describing the girl’s attitude when she is wrestling, propagating the style in which she slams the opponent down and how the girl is powerful to choke down even huge men in wrestling. Amitabh Bhattacharya’s lyrics are amazing and this song will definitely be on your workout songs list to motivate you enough!

The second version of “Dhaakad” is sung by the man Aamir Khan himself. Aamir does the soft rap perfectly and has even danced in the video song. We loved both the versions of Dhaakad!

This song lyrics are exactly opposite of “Haanikarak Bapu”. Gilehriyaan describes how the daughter is now enjoying every second of her freedom away from her father’s tough work-out routine that he had set for her. The song is a beautifully sung by Jonita Gandhi and it’s a very feel-good and mood-lifting song.

The title track of ‘Dangal’ is sung by Daler Mehendi, who gives this song a strong feeling with his powerful voice. Amitabh Bhattacharya’s strong and powerful lyrics go hand in hand with Daler Mehendi’s dominating voice make this song a deadly combo. This song can rightly be called the anthem for wrestling in India.

Sung by Arijit Singh, this song looks like a spin-off of “Channa Mereya”. Not that it is bad, but we just felt that the song composition could have been better. The song changes from slow to soft music in a while and we get the hang of it then.

This is a woman folk wedding song sung by Jyoti and Sultana. It has got the village feel to it and can be played in sangeet ceremonies to match the dance mood.

Overall, Dangalis one gem of an album. All the songs have different taste and they look situational and in accordance with the theme of the movie. We give 3.5/5 to the music album of Dangal. Our pick of the lot are ‘Dangal title track’, ‘Haanikarak Bapu’ and ‘Dhaakad’.

Directed by Nitesh Tiwari, Dangal is an extraordinary true story based on the life of Mahavir Singh and his two daughters, Geeta Phogat and Babita Kumari. The film traces the inspirational journey of a father who trains his daughters to become world class wrestlers. The movie is slated to release on 23rd December 2016.