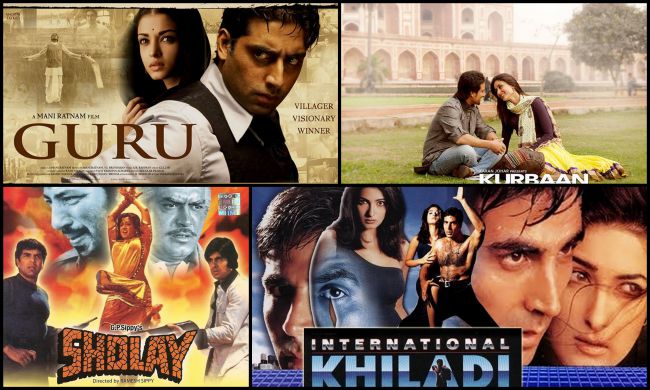 Whenever we get to see a real-life couple working together on the big screen, we simply cannot hold our horses. The excitement of seeing a married couple, who spend every day together, on the big screen is an exhilarating experience in itself and thus, we are here with the Best Bollywood movies featuring real life couples- Aishwarya Rai Bachchan and Abhishek Bachchan got married in the year 2007 and the same year, one of their best films Guru came out. Though they had appeared in a number of films before this one, Guru is unarguably their best one together. With Abhishek in his top form and Aishwarya looking her natural self, Guru met with international critical acclaim and emerged as a box-office success. Anees Bazmee’s Pyaar To Hona Hi Tha established Ajay and Kajol as ‘the couple of Bollywood’. This movie is still considered one of the best films featuring the happily married couple. The movie was a remake of French Kiss but the movie still had a heart of its own and the chemistry shared between the leads was even better than that of the leads in the Hollywood original. Ajay and Kajol got married pretty soon after the movie came out.

Jaya and Amitabh appeared together in films like Zanjeer, Abhimaan, Chupke Chupke, Mili, and Sholay. While many might say that Sholay is their favourite one, we beg to differ. Both the films released in the same year and Chupke Chupke is still remembered for the comic timing shared by Amitabh-Dharmendra. Plus the chemistry between Amitabh and Jaya was great to look at. In fact, Jaya was pregnant during the shooting of the movie. The film gained a lot of attention even before its release due to the very controversial poster of the movie. Saif and Kareena were reportedly dating while they were shooting for the film and thus they shared an amazing chemistry in the movie. Even though Saif played the bad guy in the movie, they made an amazing pair and perhaps this was what led to their marriage three years later. This movie was Ritesh and Genelia’s first film post marriage and before this one, they had appeared together in Tujhe Meri Kasam and Masti. Being their third film, they both looked great in this sweet love story and it was almost like watching them fell in love with each other all over again. This movie is undoubtedly one of the best films featuring both Ritesh and Genelia. Sholay is remembered as one of the best films ever made in Bollywood for a number of reasons and the pair of Dharmendra-Hema was a major reason for it. While Hema looked perfect in the role of talkative and quirky Basanti, it was Dharmendra who fell in love at first side in the movie as well as in real life. Their chemistry is a treat to watch and we love the fact that they actually fell for each other while shooting for the movie. When Rishi Kapoor and Neetu Singh decided to do a film together after a long hiatus of 30 years, we were absolutely sure that we are going to see something amazing and the movie turned out to be just that. How the duo turns a simple story about a middle-class family into one of the best family dramas we saw in a long time is the perfect example of how the couple can do wonders when they are together, even at this age. Akshay Kumar and Twinkle Khanna worked together in just two films, International Khiladi and Zulmi. International Khiladi was an average hit while Zulmi tanked badly at the box office. Twinkle’s inning as an actress was a short one and since her marriage with Akki, she has been winniing our hearts as a writer.

What are your thoughts about this list of Best Bollywood movies featuring real life couples? Do tell us below before you leave.