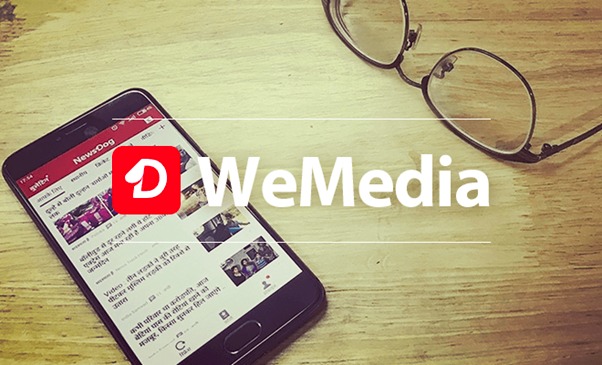 As you unlock your smartphone, be it Android or iPhone, you must have a news app named NewsDog, in it. With more than ten million user base, NewsDog is now one of the most popular news apps in India, mainly because it provides a new concept to media market, called, “WeMedia”.

WeMedia as a concept has become a social phenomenon in the USA, South America, and East Asia. With more than 2.3 million WeMedia writers all over the world, it has become a popular go to place for bloggers to easily share and monetize their content.

NewsDog launched its WeMedia platform in May 2017. Within three months, over 2,000 bloggers had signed up and had started monetizing their content. Still, in the nascent stage, NewsDog is able to provide around Rs 500 lakhs to its student writers. With the total number of WeMedia writers in India expecting to cross 1,00,000 by 2018, the market is set to grow manifold.

But statistics also show that almost 95% of bloggers fail to manage their blog after signing up on WeMedia. With most of the writers being students in college and universities, NewsDog aims to provide total support and guidance to make them write and earn better.

“Every student who joins our WeMedia platform will get a Rs 500 sign-up bonus and special support to help them reach a larger audience. We’ll also give a Writer Certificate to students who need it for securing a job after graduation. Apart from that, NewsDog will provide a yearly scholarship for best writers from one of the colleges or universities. In all, we expect to give around Rs 500 lakhs to student writers,” said a NewsDog spokesperson, “and what excites us is, we are building a billion-dollar WeMedia market in India, that too with Indian students on board. We are happy to work with future backbones of Indian society.”

Showing some examples of WeMedia writers who have been successful with News Dog’s platform, he shared stories about a children’s literature writer, Jamshed Azmi, who signed up on NewsDog WeMedia platform in May and started publishing original articles. Within three months, he got more than 2 million views and was able to reach a wider reader base. A college student, Arjun Yadav, earned Rs 17,000 in one month and was able to send some money back to his parents. But the last example took us by surprise, the spokesperson shared the story about a housewife, named Heena Rani. Having spare time after her chores, she writes on lifestyle, beauty and food tips and earns Rs 15,000 in one month.

NewsDog WeMedia team will visit dozens of colleges and universities from August 2017. You will receive information related to the student presentation before the team is expected to arrive at your college/university.

If you are not able to meet the NewsDog WeMedia representatives you can always create your account at:

For further details write to us at wemedia@hinterstellar.com