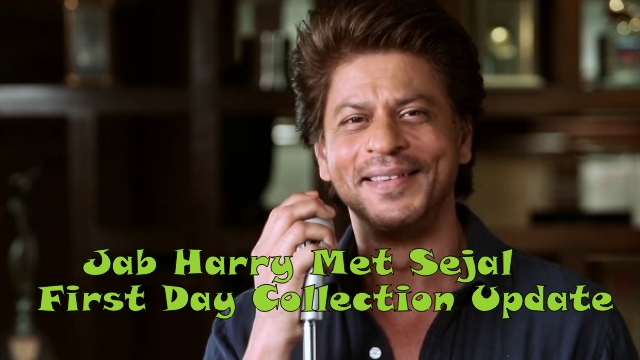 Jab Harry Met Sejal Day 1 Collection: 2017 hasn’t been a great year for Bollywood so far as the filmmakers and distributors have incurred huge losses in the last three months. Tha failure of biggies like Tubelight, Jagga Jasoos, Munna Michael and Mubarakan have sent shock waves across B-Town. The Bollywood is looking for a desperate hit and all eyes are now set of Shah Rukh Khan’s Jab Harry Met Sejal. The movie has hit the theatres today and as per the reports coming, it has taken an average opening at the box office. Let’s have a look at Jab Harry Met Sejal first day collection and occupancy report:

Morning Shows:
As per the early reports by Box Office India, the movie has taken a decent opening at the box office. As expected, the opening is best in the multiplexes of big cities like Mumbai, Delhi, Pune, Bangalore and Kolkata. Here the movie has taken the second best of the year after Bahubali – The Conclusion.

In other major cities, the opening is less than Raees and Tubelight. This was expected as it is an urban-centric movie. Such movies largely depend on the word of mouth and content.Jab Harry Met Sejal has been released on around 3300 screens which are even less than Shah Rukh Khan’s last release Raees (3400). Despite clash Raees with Kaabil, Raees was released on huge screen count but Red Chillies has played safe this time. Noon Shows Report
The movie remained flat in the noon shows. As expected, the occupancy in the single screens and mass centres was low. Multiplexes in metro cities gained some growth but still, there is a big scope for improvement.

Evening and night shows report
The movie witnessed huge growth in the evening and night shows thanks to the multiplex audience in the major metros of the country. The occupancy in big metro cities was as high as 70%. Despite mixed reactions, Shah Rukh Khan’s star power has worked for the film on the first day. As per official numbers shared by producers, Jab Harry Met Sejal 1st day collection is 15.25 crores. It is the fourth highest opening day grosser of 2017 after Bahubali 2, Raees, and Tubelight. In terms of occupancy, the movie has performed on the same lines as Salman Khan’s Tubelight. The opening day collection of JHMS is less than Shah Rukh Khan’s recent films like Dilwale, FAN and Raees.

Talking about highest opening day grosser of Shah Rukh Khan, Jab Harry Met Sejal is at the seventh position. It fails to beat the opening day collection of Raees, Dilwale and even Ra. One and Don 2.

Generally, urban rom-com’s don’t take huge openings at the box office and same is the case with Jab Harry Met Sejal. Still, the opening is good due to Shah Rukh Khan’s star power. It remains to be seen, how the movie performs on Saturday and Sunday as the reports are mixed.

What are your views on Jab Harry Met Sejal first day collection? Share your thoughts with us in the comments section.