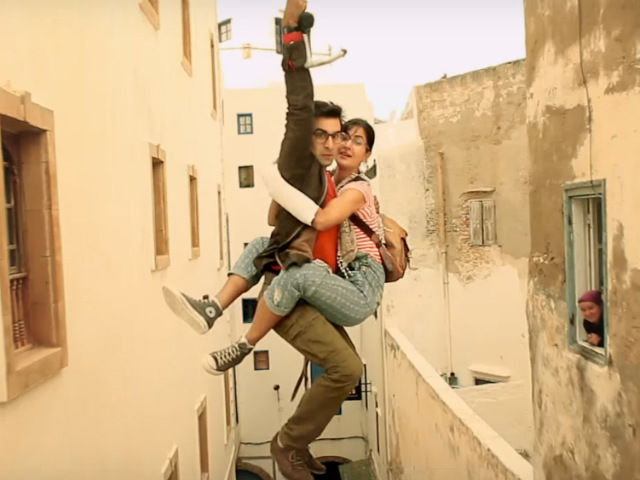 Ranbir Kapoor and Katrina Kaif starring ‘Jagga Jasoos’ is one of the most awaited Bollywood movies of 2017. It had created a huge buzz with its teaser and chartbuster songs where we got the glimpse of adventures involved in the movie. Just two weeks before the film’s release, the makers have released a new trailer. Jagga Jassos new trailer is here and it is full of adventures added to that is Ranbir’s class acting. It could be his career best acting performance. Watch Jagga Jasoos new trailer right here!

Jagga finds it difficult to speak normally so he sings to make it smoother to speak and also makes it simpler for the listener, the line “Mere words so-so nikalte hai. Islie gaake bolta hoon. So that thoda smooth ho jaye.” shows this. Katrina Kaif plays Shruti also called Jaghead, an innocent and beautiful girl who joins Jagga in his adventure.

Jagga and Shruti are seen chasing and running throughout the trailer, sometimes on building, sometimes on the bike and sometime in the plane. “6 months, 7 days and 8 hours” turned into a never-ending wait urging Jagga to put out his mystery solving ‘antenna’. Jagga’s father is thought to be dead in a road accident but somehow Jagga finds out that his father is not dead but has been kidnapped since many years and he decides to save them, and that’s where all the adventure begins. There’s some gun battle, a plane crashing, running on train roofs, scooter rides and a lot of hazardous events, none of which fail to stop Jagga Jasoos. Jagga Jasoos Trailer is one of the finest trailers of the year with some excellent work of VFX and music.

You may also like: Galti Se Mistake song from Jagga Jasoos: Ranbir Kapoor’s quirky moves will make you groove

Jagga Jasoos is Ranbir Kapoor and Katrina Kaif’s third film together. The former couple broke up in 2016 after dating for six years. The film is all set to release on 14 July 2017.