As Bollywood’s dazzling diva Deepika Padukone celebrates her 34th birthday, we will have a look at her Bollywood journey through her movies.

Deepika Padukone was born in Copenhagen, Denmark on 5th January 1986. She is the daughter of renowned badminton player Prakash Padukone and his wife Ujjwala. Having an active career in sports alongside studies, Deepika gave up sports in order to become a model.

Starting off with few brand endorsements to debuting at Lame Fashion Runway to becoming a face of Kingfisher Calendar and then starring in a Himesh Reshammiya music video, the actress was then noticed by director Farah Khan and was cast opposite Shahrukh Khan for ‘Om Shanti Om’. Rest, as they say, is history. Let’s have a look at Deepika Padukone’s Bollywood journey through her movies.

1) Om Shanti Om (2007):  Deepika played the famous actress ‘Shanti Priya’ who’s admirer is her fan Shah Rukh Khan. She played a double role in the movie, the second was which she came back reincarnated. This love revenge was the biggest hit of the year and Deepika became an overnight star.

2) Bachna Ae Haseeno (2008): Her second film was also a multi starrer project and she was cast alongside the Kapoor brat Ranbir Kapoor. The film too became a hit and added another feather on Deepika’s success cap.

3) Chandni Chowk to China (2009): Deepika was paired opposite Khiladi Akshay Kumar for the first time and again she played a double role. Though the film flopped at the box office, Deepika didn’t go unnoticed.

4) Love Aaj Kal (2009): Imtiaz Ali’s modern age approach to love plot was played by her opposite Saif Ali Khan. The chemistry was loved by all and the film was a super hit.

5) Karthik Calling Karthik (2010): This suspense movie gave Deepika a chance to explore her different side in roles. Cast opposite Farhan Akhtar, this film was a Box office failure. However, Farhan – Deepika’s on and off-screen chemistry made huge headlines.

7) Lafangey Parindey (2010): Deepika played the role of a girl who meets an accident and turns blind. Neil Nitin Mukesh and her chemistry wasn’t that good in the movie, which resulted in the failure at Box Office.

8) Break Ke Baad (2010): The childhood love story of Deepika-Imran Khan was loved by most. It was an average hit.

10) Aarakshan (2011): She again teamed up with Saif Ali Khan and first time with Amitabh Bachchan for this political satire. This Prakash Jha’s directorial was an average hit.

12) Cocktail (2012): Deepika came back with a bang playing the role of a party animal who then finds herself in a love triangle with her best friends. Deepika’s pairing with Saif Ali Khan was loved again. Result: Blockbuster.

13) Race 2 (2012): Abbas-Mustaan’s thriller, she was again paired with Saif Ali Khan. She played the role of Tycoon John Abraham’s sister. The film was a super hit.

14) Yeh Jawaani Hai Deewani (2013): The film made huge headlines cause of Ranbir-Deepika’s pairing after break up. The film was a Blockbuster and Deepika totally rocked as the ‘Nerdy Naina’.

15) Chennai Express (2013): This was Deepika’s first film with director Rohit Shetty. She was again paired up with her debut movie co-star SRK. The comedy-drama was her second Blockbuster that year.

17) Kochadaiyaan(2014): Playing the role of a princess, Deepika’s first film with South superstar Rajnikanth failed in Hindi but was a blockbuster in Tamil.

18) Finding Fanny (2014): Playing the role of a Goan-Konkani girl named Angie, Deepika rocked the girl next door look and her pairing with Arjun Kapoor made this film a huge hit.

19) Happy New Year (2014): The highest opening collection film of the year, Deepika again teamed up with Farah Khan and SRK. the movie was an instant hit at the Box Office.

20) Piku (2015): Piku brings an endearing journey of a father and daughter. Deepika Padukone is at her natural best, Irrfan Khan is fab and Amitabh Bachchan is an absolute delight to watch. Piku is a movie to be experienced.

21) Tamasha (2015): Tamasha may not have worked at Box Office but Deepika’s classy performance was the biggest strength of the movie.

24) Padmaavat (2018): Deepika played Rani Padmavati in Sanjay Leela Bhansali’s Padmaavat. As expected, she nailed it in one of the most difficult roles of her career.

Deepika will be next seen in Chhapaak. The film is releasing on 10 Jan 2020. Deepika is playing an acid attack survivor in the film. Needless to say, she will rock this role as well.

Deepika has a younger sister Anisha, who is a golfer. She stays in Prabhadevi, Mumbai. Deepika is married to Ranveer Singh. Both of them looks adorable together. In the past, she dated Ranbir Kapoor who dumped her for Katrina Kaif. However, she still shares a friendship with him. Deepika is also active in charities and also write columns for Hindustan Times and Women magazines. 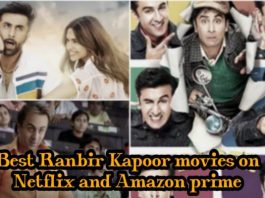