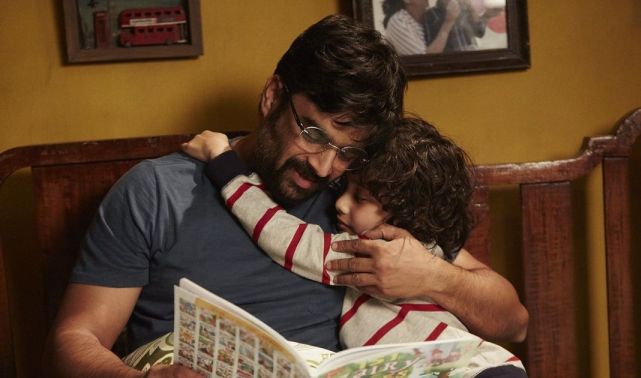 How far will you go to save the life of a loved one?  Is there something right or wrong, when it comes to your child? Are bad deeds justified when they are committed for good reason? Breathe, Amazon Prime’s second and latest India original, explores all these questions. The producers of Airlift and Baby have collaborated with Amazon for their new riveting original series. This 8 episodes thrilling series will soak you.

Here’s what ‘Breathe’ is all about

Directed by Mayank Sharma, the show revolves around two lead characters- Danny Mascarenhas (R. Madhavan), a doting single parent to a six-year old boy Josh and Kabir Sawant (Amit Sadh), a relentless cop who’s struggling with his past. Josh suffers from a life-threatening lung condition known as Cystic Fibrosis. Danny and his mother Juliette want nothing more than to see Josh get better and live a normal life like other kids of his age. The only way he will be able to lead a normal life is a lung transplant. This is where begins Danny’s heart-wrenching journey from a being desperate parent to the point of no return. Danny decides to take the treacherous path which may or may not lead to a normal life for his son, whom he loves dearly. All this at the cost of losing everything that he holds dear. Kabir Sawant is someone who does not follow the norms and has some disturbing episodes personally as well as professionally. He takes to the bottle and is considered to be an alcoholic by his department. But his instincts help him catch a whiff of something murky going down and he decides to follow the leads accompanied by Prakash, who is that one side-character you start loving instantaneously. What you can expect from this amazing original?

I have watched all 8 episodes and must say that it kept me on the edge of my seat. Despite regular treatments, Josh’s condition was nowhere getting better. The first nail in the coffin for Danny was when he found about the minimal chances of Josh’s survival and that his only chance was organ donation. His whole life revolves around his son, his ageing mother and he simply could not afford to lose his son. This is where he chooses to create his fate with the sole purpose of his son’s wellness in mind. Day by day, Danny gets emboldened, but one of his plans does not go as he would have liked it. Kabir Sawant, being the greyhound that he is, smells something off and is convinced that there is more to the story than meets the eye. Along with Prakash, Kabir lands an important clue despite facing the wrath of his seniors. Kabir’s relentlessness and his eye for details get him deeper into the ongoings, and he finds out that his wife’s life may be in danger. Danny comes under his radar, but he manages to prove to his alibi.

Danny may have chosen a very dangerous path, but when you put yourself in his place, it is quite hard to tell right and wrong. With the impending fear of losing his son, if things do not fall miraculously into the right place, Danny was bound to do something. Even though Danny is a God-fearing family man, it seems quite stupid to wait for a miracle to happen. It’s natural to take care of things when your family is involved. Unfortunately, no matter what the reasons are, you can never justify doing something evil. Some people create their own storm and then get mad when it rains. But Danny knew what he was getting into when he decided to take matter into his own hands. He may be doing what he thinks is best for the survival of his only child, he may even be the best father or the best football coach, but the sad truth is that two wrongs do not make a right. It does not matter how much good you have done all your life, what matters is that you always stay that way. One wrongdoing and you lose the very essence of your life.

We are thankful to Amazon and our hopes are high

Amazon has done us a huge favor by investing in Originals in India else Breathe Amazon would not have been possible. There is so much talent in India but we do not have the proper platform to showcase of all of it. Amazon is giving a chance to such talented creators who are dying to tell their stories and bring a whole kind of entertainment in front of the Indian audiences. We are used to watching lovey-dovey soaps, movies as we really do not have much variety here. But Amazon’s entry into the market with Original Series has given us a chance to some soul-searching experiences. The best thing about Breathe is that the Original Series not only tells us about the struggle of a single parent reeling with a son’s disease, but it also comes with a message. The message is for everyone to watch and learn from. This is why I would recommend people to watch this original, it will definitely be something extraordinary, and nothing like you have seen before in India. R. Madhavan has broken all records with such a natural portrayal of a father, and Amit Sadh has shown a whole new side of him as an angry young man. Both the lead actors have given superb performances, and the supporting cast is amazing as well. All their efforts have led to the creation of a masterpiece in the true sense of the word.

Breathe Amazon Prime original series has been such a refreshing change of pace from the good-old shows that the Indian public is used to watching. With a strong message at heart, Breathe Amazon leaves you with a simple but important lesson, you reap what you sow. Life has a funny way of making you with what others go through. Karma is a bitch, and things are not going to end well for Mascarenhas. Will Mascarenhas’s dark truth come out in the next season? Will Kabir be able to stay motivated? Who will be the next victim? Will Kabir be able to put a stop to everything before anyone else gets hurt? We will have to stay tuned and wait for another gritting season of Breathe. Meanwhile if you are craving for something thrilling then you should give Breathe Amazon Prime Original a try!