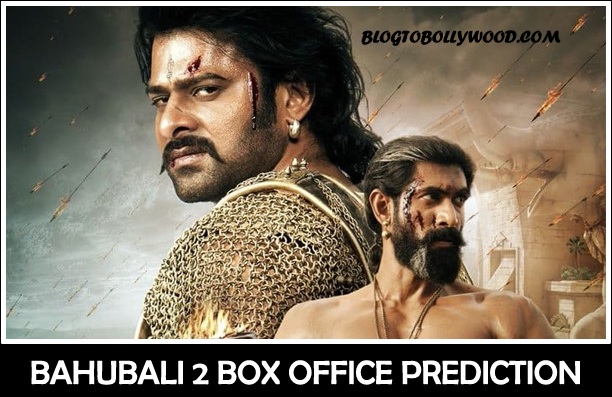 The most awaited movie of 2017, Bahubali 2 is all set to hit the theatres tomorrow and the excitement of the fans is at the peak. Bahubali 2 starring Prabhas, Rana Daggubati, Anushka Shetty and Tammannah Bhatia is a sequel to 2015 blockbuster historical drama, Baahubali: The beginning. The first part of the movie was a huge hit with the worldwide collection of Rs 650 crores and expectations from this part are damn too high.

The buzz surrounding Bahubali 2 is fantastic and it is expected to take an earth-shattering opening at the domestic and overseas box office. Apart from the movie, we are also excited about the records it will create or break at the box office. Let’s have a look at Bahubali 2 box office prediction.

Read: The pre-release earnings of Bahubali 2

When it comes to a movie like Bahubali 2, it is better not to talk about the hype and buzz. We all know that it is the most awaited movie of the year. The fans are super excited and curious to know, Why Kattappa Killed Bahubali? The trailer of Bahubali 2 has further raised the expectations. Director SS Rajanouli has made it clear that the first part was just the trailer and the second part will be the real meat. Overall, the buzz surrounding the movie is amazing as the advance booking has garnered record breaking numbers.

The first part of Bahubali: The Conclusion, ‘Bahubali: The Beginning’ was a big blockbuster. It was the first south Indian movie to cross 100 crores in the Hindi version. Despite its competition with Salman Khan’s Bajrangi Bhaijaan, the movie shattered many box office record and emerged as the first south Indian movie to cross 500 crores worldwide. The craze for the second part of the movie is incredible and it is almost sure that we will witness an earth-shattering opening at the box office on 28 April 2017.

The Hindi version of the movie is releasing on around 3000 screens. Even with 60% to 70% occupancy, Bahubali 2 will cross 20 crores on the first day. The advance booking reports are encouraging as around 80% of the first day shows across the country have been already booked.

Considering all the above points and advance booking report of Bahubali 2, we are expecting it to earn at least 22 crores on the first day. The Hindi version of Bahubali 2 will beat the lifetime collection of Raees, Jolly LLB 2 and Badrinath Ki Dulhania. It will remain the highest grossing movie of 2017 till the release of Salman Khan’s Tubelight.

The worldwide first day collection of the movie may cross 75 crores. Bahubali 2 will be the highest opening day grosser beating Rajinikanth’s Kabali which grossed 87.5 crores on the first day/ Talking about the worldwide lifetime collection, Bahubali 2 has a chance to become first Indian movie to cross 1000 crores mark worldwide.

What are your expectations from Bahubali 2? Share your predictions with us in the comments section.