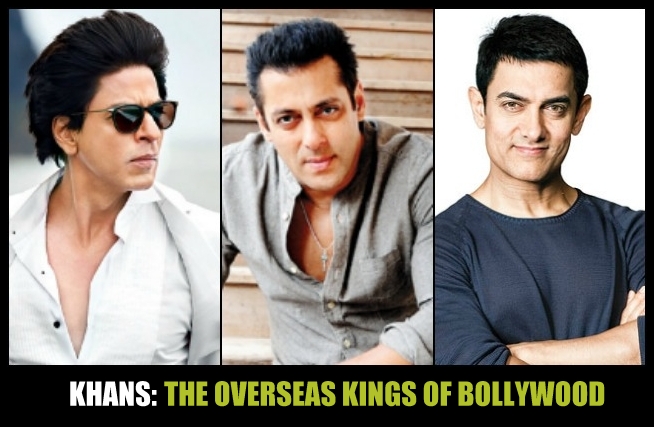 Top 10 Highest Grossing Bollywood Movies In Overseas: Before we talk more about the overseas list, I would like to declare the judging parameter for this list. The list is based entirely on the collections made by Bollywood movies at Box Office in the overseas market, excluding Indian market.

Talking about the actors, Aamir Khan acquires the top 3 position in the list with his movies, Dangal, PK and Dhoom 3. Shah Rukh Khan has four movies in top 10 while Salman Khan has only two.

Shah Rukh Khan has maximum hits in overseas. Out of top 50 overseas grossers, 16 belongs to SRK. He is a legend of sort as far as overseas box office is concerned.

Talking about the actresses, the list is dominated by Deepika Padukone, Anushka Sharma, Kajol and Kareena with two movies each in top 10 followed by Katrina who has one movie.

According to me, Aamir Khan is the true overseas Box Office king as top 3 positions in the list are occupied by his movies. Salman Khan and Shah Rukh Khan follows him. Aamir Khan has gained huge popularity in overseas market with films like PK, 3 Idiots and Dangal. As above table suggests, his latest release Dangal was a mega blockbuster in the overseas markets.

Who, according to you is the global Superstar of Bollywood? Shahrukh Khan or Aamir Khan or Salman Khan?

Which is your favorite movie from the list shown above? Please share your views with us. Stay filmy and happy and keep following us for latest updates on Bollywood.

All Time Blockbuster movies of Bollywood