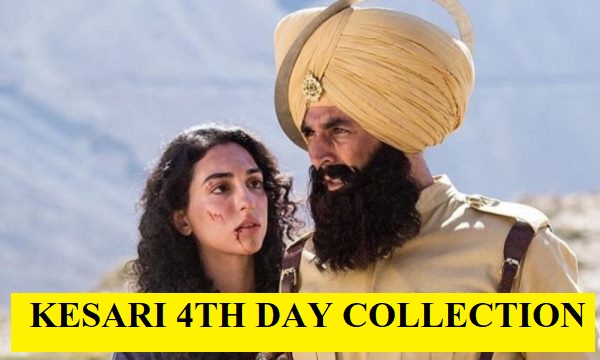 Akshay Kumar and Parineeti Chopra starrer Kesari had a pretty good Sunday at the box office. As per early estimates, Kesari earned around 21 crores on its fourth day to take the first extended first weekend total to 76+ crores.

Despite a pretty good opening weekend, the movie had underperformed after a solid opening (21.06 crores on a Holi day). The expectations are not met as far as the box office numbers are concerned.

After a huge opening day with the collection of 21.06 crores, the movie by around 22% on its second day and earned just 16.7 crores. On its third day, Kesari saw a growth of around 10% and earned 18.7 crores. On the last day of the extended weekend, the movie again witnesses small growth and earned around 21 crores.

Kesari: Will it survive the critical Monday test?

I am expecting a big fall on Monday as IPL season has started and the night shows will get affected. Kesari hasn’t been able to deliver on the predicted lines as most of the experts were expecting a 90 crore opening weekend.

Kesari should enter 100 crore club by the end of the first week. 200 crore is out of the equation now. I am expecting it around 140 crores in its lifetime.

The total budget of the movie is around 100 crores. If will be a hit at 130 crores, super hit at 160 crores and blockbuster at 220 crores lifetime collection.

Directed by Anurag Singh, Kesari is based on one of the bravest battles Battle of Saragarhi, military combat between 21 soldiers of the Sikh Regiment of the British Army and 8,000–12,000 Afghans.