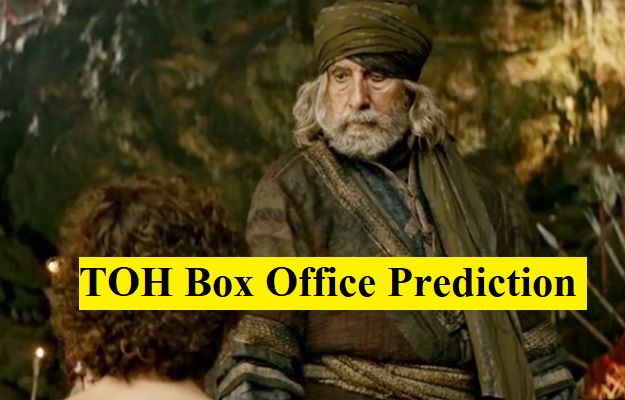 Thugs of Hindostan Box Office Prediction: Aamir Khan and Amitabh Bachchan starrer is all set for a huge opening at the box office.

One of the most awaited movies of the year, Thugs of Hindostan is all set to hit the theatres on 8 Nov 2018. It is a huge film for everyone associated with it. For the first time, two megastars of Bollywood, Amitabh Bachchan and Aamir Khan are coming together for a movie.

The expectations from the film are high as it stars Aamir Khan who is known to create new records at the box office. However, we should keep in mind that the trailer of the film has received a mixed response.

The film is hugely driving on Diwali holidays and the word of mouth of the audience would play an important role after the first weekend. Let’s have a detailed look at Thugs of Hindostan box office prediction.

Strong Star Cast: For the first time in the history of Indian cinema, two megastars Aamir Khan and Amitabh Bachchan are working together. This in itself is a huge positive for a film.

Good Release Date: The film is releasing on Diwali. It will enjoy four days extended weekend at the box office. The family audience will come in big numbers to witness this larger than life adventurous drama.

Huge buzz: Though the trailer has disappointed many, there is no denying that TOH is one of the most anticipated films of the year.

Disappointed trailer and negativity: Ever since the release of the trailer, there is a lot of negativity surrounding the film. People are comparing it with Hollywood blockbuster ‘The Pirates Of Carribean’

Poor music: The music of the film is disappointing. None of the songs has really impressed the music lovers

Thugs of Hindostan will be the widest Bollywood release of all time. It is releasing on around 5000 screens in India. It is a big festive release. The movie is expected to open with around 80% occupancy. We can expect the movie to break the opening day record of Happy New Year (44.97 crores).

I personally feel that Thugs of Hindostan will struggle at the box office especially after the extended first weekend. I am expecting the movie to earn in the range of 240 to 270 crores.

Thugs of Hindostan Box Office Prediction: Based on WOM (word of mouth) and other factors

Based on the above positives/negatives and WOM of the public, here is what we are expecting from the movie.

What are your expectations from Thugs of Hindostan? Share your views with us in the comments section. Do you think it will become the highest grossing Bollywood movie by beating the lifetime collection of Dangal?