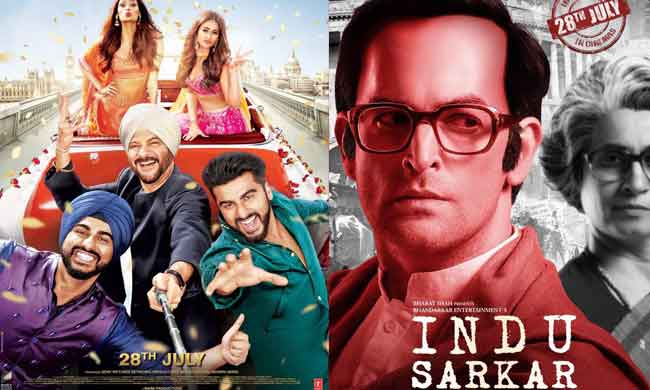 It’s been a poor year for Bollywood as far as box office numbers are concerned. Out of 100+ movies released this year, only a handful one has managed to make an impact at the box office. Not only small and medium budget movies but the biggies like Raees, Tubelight have also disappointed big time. All eyes are now on Jab Harry Met Sejal and Tubelight but before that, there is a clash between Anees Bazmee’s Mubarakan and Madhur Bhandarkar’s Indu Sarkar. Let’s have a look at Indu Sarkar, Mubarakan box office prediction.

Anees Bazmee’s Mubarakan stars Anil Kapoor, Arjun Kapoor, Ileana and Athiya Shetty. Much like Bazmee’s previous films like Welcome, Welcome Back, Ready and No Entry, Mubarakan is also a family film with loads of comedy. A perfect family entertainer is a need to the hour but there are several negatives.

1. Low pre-release buzz: The movie hasn’t been able to create hype and buzz, we expect from Anees Bazmee film.
2. Average music and songs.
3. Lack of A listers in star cast: Unlike previous Anees Bazmee films that had big star cast, Mubarakan lacks big names.
4. Release period: With two biggies lined up for release in next two weeks, Mubarakan has just one open week at the box office. Keeping all these points in mind, we expect Mubarakan to open with decent numbers. The movie should collect around 7 crores on opening day. Comedy movies have huge fan base in Indian and if accepted by the audience, Mubarakan has a good chance to emerge as big hit at the box office. Our predictions are given below:

The expectations are not high as political drama films have limited fan base in the country. However, the controversies have certainly raised the curiosity level and the film might get a decent opening at the box office. As per our expectations, Indu Sarkar will collect around 2.5 crores on the first day. Made on a limited budget of around 15 crores, the movie will be a box office hit if it manages to earn 20 crores. Our predictions are given below: What are your expectations from these films? You can also tell us about Indu Sarkar, Mubarakan box office prediction in the comments box.