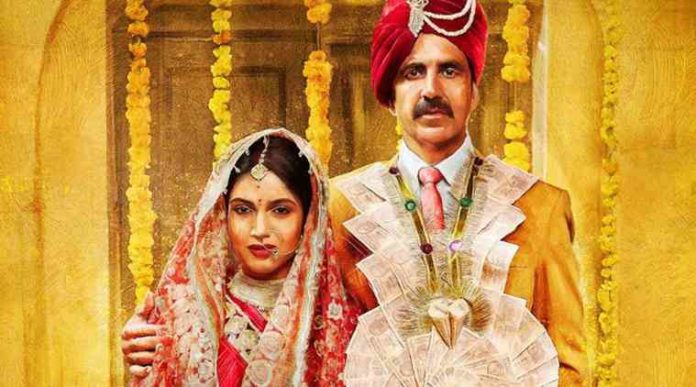 Toilet Ek Prem Katha first day Collection: Akshay Kumar and Bhumi Pednekar starrer TEPK has finally hit the theatres yesterday. As per the reports coming, the movie is off to a decent start at the domestic box office. It started low in the morning and then saw good growth in the evening shows to put up a decent first day total. As per official numbers shared by Taran Adarsh, Toilet Ek Prem Katha first day collection is 13.1 crores.

Morning Shows Occupancy Report
Released on 3000 screens, the movie recorded 20% to 25% occupancy in the morning shows. This is a slow start as the expectations were large and the movie has created good pre-release buzz. The film has opened better than Akshay Kumar’s last release Jolly LLB 2 in places like Rajasthan and Gujarat. But the collections are lower than that film in the metros like Mumbai, New Delhi, Kolkata and Pune. Multiplexes were always expected to be low as the film has a rural subject. Single screens are yet to start and it remains to be seen, how the movie performs in the mass centres. There are good chances that the movie will show growth in the small and mass centres.

Noon Shows Occupancy Report
TEPK has shown good growth in the noon shows which was expected after a slow start. The single screens and mass centres have started on a positive note. The overall occupancy in the noon shows was around 35%. Central and North Indian circuits were the best performing circuits.

TEPK has been made on a controlled budget of 35 crores including the promotion and advertising cost. As per the reports, the domestic distribution rights were sold for 53 crores. While the makers have made a huge profit before release, the movie needs to cross 100 crores to be a safe bet for the distributors. A healthy first weekend is required to enter the 100 crore club and Akshay Kumar fans would be hoping for the same. What are your views on Toilet Ek Prem Katha first day box office collection? Share your views with us in the comments section. The official numbers will be updated at 1:00 pm.