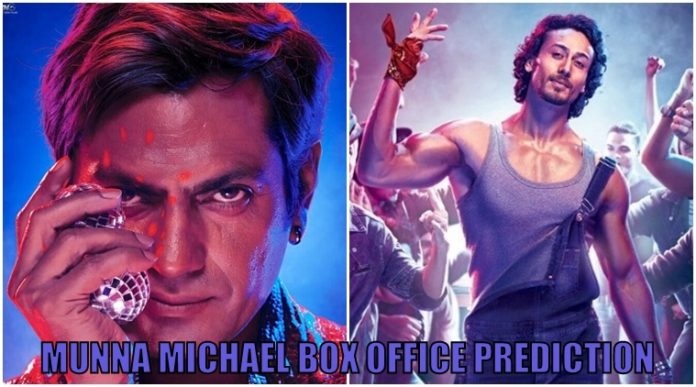 Tiger Shroff and Nidhhi Agerwal starrer Munna Michael is all set to hit the big screens tomorrow. It looks a typical Bollywood masala film with all entertaining elements like drama, action, comedy and above all dance. Munna Michael marks the third collaboration between Shroff and director Khan after Heropanti and Baaghi. Both movies were super hit at the box office and thus Tiger Shroff’s fans have huge expectations from Munna Michael. The movie has created decent buzz before release. Let’s have a look at Munna Michael box office prediction and try to analyse its potential.

The trailer of the movie was released on 5 June 2017 and it seems that Tiger Shroff and Sabbir Khan has a winner in their hands. Just like their previous movies, Baaghi and Heropanti, this one looks a full on masala potboiler. Let’s have a look at some positives and negatives:

Positives
1) Tiger and Sabbir Khan’s impeccable box office record. Both Heropnati (55 crores) and Baaghi (73 crores) were super hits at the box office.
2) The movie has created good buzz before release.
3) Mass appeal: The film looks like a total entertainer. It has all the ingredients we expect from a mass masala Bollywood movie.
4) Good music.

Negatives
1) The multiplex audience may stay away from it.
2) Unknown female lead: Nidhhi Agerwal is making a debut with the film.

With the kind of buzz, Munna Michael has created, we expect it to take a decent start at the box office. The movie will release on around 2200 screens. With 40% to 45% occupancy, we expect the movie to earn around 10 crores on the first day. The first weekend collection of the film will be around 30 crores. With positive word of mouth, Munna Michael has a good chance to make it big at the box office. It may become Tiger Shroff’s first 100 crore movie.

Let’s have a look at the first day, first weekend, first week and lifetime collection prediction of Munnai Michael. These predictions are made considering the budget of the movie to be around 50 crores including printing and advertising cost.

You can also write your Munna Michael Box Office prediction in the comments section. Predict the first-day collection of Munna Michael.