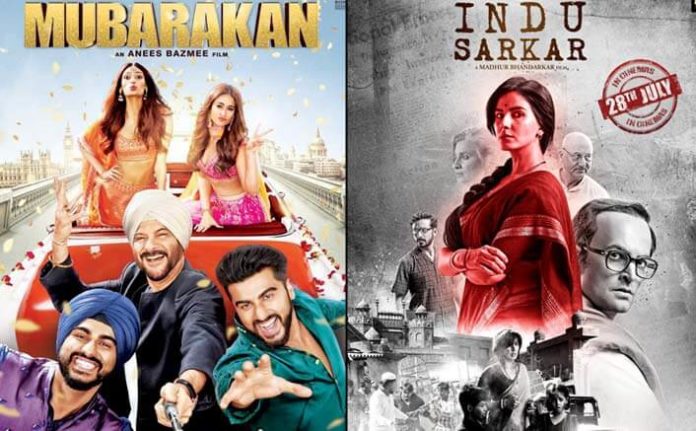 Mubarakan, Indu Sarkar First Day Collection: 2017 has been an average year for Bollywood. Out of more than 100 movies released, only 5 to 7 movies have made an impact at the box office. Last three months have been terrible as biggies like Tubelight, Jagga Jasoos and Munna Michael tanked at the box office. While Bollywood is all down and out, the audience is now waiting for Shah Rukh Khan’s Jab Harry Met Sejal and Akshay Kumar’s Toilet: Ek Prem Katha. But before that, Anik Kapoor’s Mubarakan and Madhur Bhandarkar’s Indu Sarkar have hit the big screens today. Let’s have a look at their first day collection report.

As per the reports coming, Mubarakan is off to a poor start. The movie recorded around 15% to 20% occupancy in the morning shows which is poor considering its genre. As expected, the opening is best in North India because of local flavour.

The movie remained flat in the noon shows. However, it witnessed good growth in the evening shows especially in medium level metros and multiplexes of north India. Surprisingly, the movie has received good reviews from critics and it is expected to grow further in the night shows. As per official numbers shared by Taran Adarsh, Mubarakan earned 5.25 crores on its first day. The movie needs a huge growth over the first weekend as it has only one week to do most of its business. From next week, the major chunk of screens will be allocated to Shah Rukh Khan’s Jab Harry Met Sejal.

Anees Bazmee is known for making comedy films like Welcome, Welcome Back, Ready and No Entry. All these films were huge hits at the box office and the filmmakers are expecting the same result this time around as well.

Madhur Bhandarkar’s Indu Sarkar has been in controversies for a long time now. After many protests and legal issues, the movie has finally been released across the country. Starring Neil Nitin Mukesh, Kriti Kulhari and Anupam Kher, Indu Sarkar is off to a terrible opening. Released on around 800 screens, the movie recorded 10% occupancy in the morning shows. It witnessed good growth in the evening shows. The movie has received good reviews from critics and we can expect it to multiplies its business over the weekend. As per early estimates, Indu Sarkar first day collection will be around 1.5 crores.

What are your views on Mubarakan, Indu Sarkar first day collection? Share your thoughts with us in the comments section.