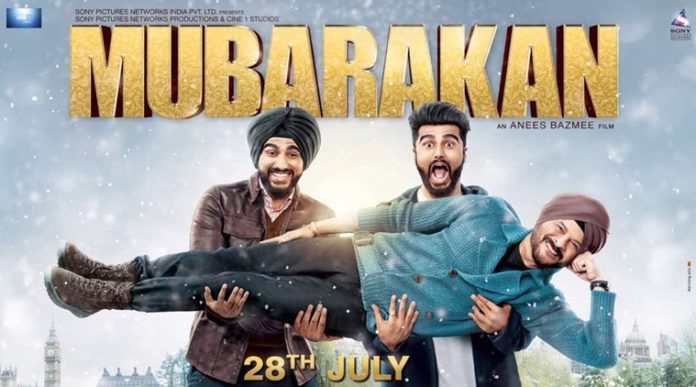 Mubarakan 2nd Day Box Office Collection: After an average opening day with the collection of 5.25 crores, Anil Kapoor and Arjun Kapoor starrer Mubarakan recorded good growth on its second day. As per report shared by Box Office India, the movie witnessed around 40-45% growth on Saturday. It earned around 7.75 crores on Saturday to takes its two days business to 13 crores. Despite big growth, the numbers are still low as the opening day collections were way too low.

Running on around 2300 screens across the country, Mubarakan recorded 25% occupancy on its first day. On Saturday, the movie saw around 40% growth in occupancy. The overall occupancy on the second day was around 35%. The biggest issue with the film is the lack of star value. Despite positive reviews, the movie hasn’t been able to grab footfalls as the star cast is weak. Has it been a big superstar like Akshay, the same movie would have earned 25+ crores in two days. Another issue with the film is the average performance in North India. Despite heavy Punjabi content, the collections are poor in North Indian cities like Delhi, Chandigarh, Punjab, Gurgaon etc. As per early estimates, Mubarakan earned around 7.75 crores on its second day. The total collection of the movie after two days stands at 13 crores. The movie needs huge growth on Sunday and then a strong hold on weekdays as it has only one week to do most of its business. From next week, the major chunk of screens will be allocated to Shah Rukh Khan’s Jab Harry Met Sejal.

Made on a budget of 70 crores, Mubarakan needs to earn 70 crores to be called a hit at the box office. The movie has already recovered 38 crores through music, satellite and digital rights.

Madhur Bhandarkar’s controversial political drama Indu Sarkar too recorded good growth on Saturday. The movie earned around 2.2 crores on Saturday to take its total collection to 3.7 crores. Made on a budget of 15 crores, the movie needs to cross 20 crores to be called a box office hit. What are your views on Mubarakan and Indu Sarkar second day box office performance? Share your views with us in the comments section.