There has been a lot of rumors around Ranbir and Katrina’s break-up. The two have not come up front about this, but the news from the B-town says that they have parted their ways for real. Every day we get to hear something about the two, the latest news says that Katrina is removed from Ranbir’s family WhatsApp group.

While at one point of time Ranbir Kapoor and Katrina Kaif were madly in love, and we all thought that they would probably end up getting married, fate had something else in store for them. During their relationship Katrina was very close to the Kapoor family and they even spent time together. She was spotted in family get together and the pictures seemed pretty happy. We have all seen her with Bebo and Lolo partying or with Neetu Kapoor shopping, this is the first time the Kapoor family has been harsh on her.

Firstly she being a part of the family’s WhatsApp group is a news itself, on top of it, she being removed is a bigger news. It is often considered rude when someone is removed from the Whatsapp group, assuming that the Kapoor family took a bold step.

It is said Ranbir’s aunt Ritu Nanda is the admin of the group and she is the one who removed Katrina from the group. That was harsh on our cute Katrina! News says the couple has parted their ways in January and Ranbir moved out from their mutual house to a new house near to his parents place. Ranbir being a mommy’s boy will have hard time finding a girl for himself. Also, the source has said, Rishi Kapoor who was never part of the group now has joined the Group after Katrina’s exit.

From all this we can all say that only blood relationship are considered family, once you are done dating no-one minds throwing you out. Our poor Katrina might still be in trauma from this insult until next time we will wait for her to reply back on this. 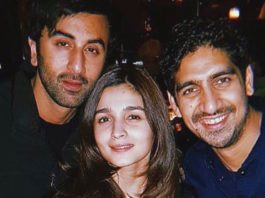 Brahmastra Postponed To 2021, Ranbir Kapoor Has No Release In 2020