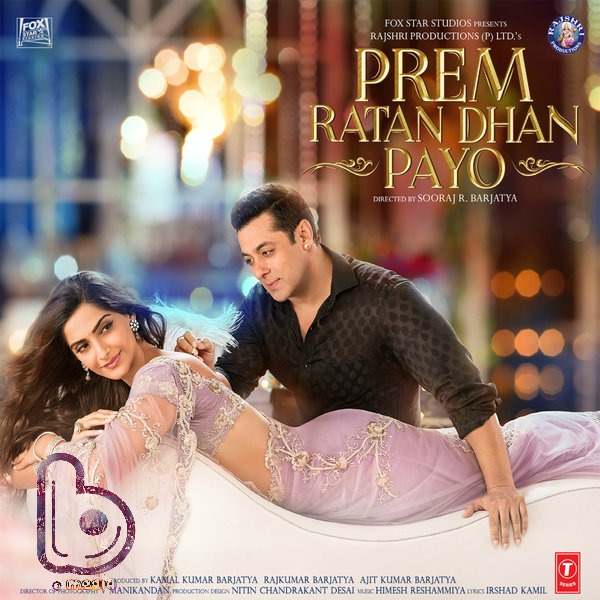 Prem Ratan Dhan Payo is all set to release on 12 November and it is the fourth time Sooraj Barjatya and Salman Khan are working together after their previous blockbusters Maine Pyar Kiya, Hum Aapke Hain Koun and Hum Saath Saath Hain. Salman Khan will be seen playing Prem after a long time. Here are some amazing Facts about Prem Ratan Dhan Payo we bet you didn’t know- According to some reports, PRDP might be the Bollywood adaptation of Anthony Hope’s The Prisoner of Zenda. The adventure novel was released in 1894 and has been adapted thrice already. The report goes on to say that the original idea of PRDP has been lifted from the novel itself. We will have to wait and watch.

The official trailer of the movie was released on 1st October 2015 and the trailer on Youtube received 5 million views within 24 hours!! That’s got to be some kind of record in itself! The film also created history when the music rights were sold for a whooping 17 crores!! During the launch of the first trailer of the film Sonam Kapoor admitted that she was intimidated to romance Salman Khan! She said she felt privileged to be a part of the film and even though she has been a huge fan of Salman Khan, she was a bit nervous. Salman Bhai does have the power to intimidate anyone but once they started shooting things went back to normal. 4. Salman has been waiting for PRDP! According to Sooraj Barjatya, Salman had not taken up any family drama film for four years as he knew that Sooraj was working on Prem Ratan Dhan Payo. Salman revealed that Sooraj was just 25 when Hum Aapke Hain Koun released and 29 at the time of Hum Saath-Saath Hain. He thinks Sooraj is a genius! After some pictures from PRDP were leaked twice, Sooraj Barjatya banned everyone from clicking pictures on the set of the film. Apparently, even Salman Khan was not allowed to not click any pictures! Sooraj is very strict! During the shooting of ‘Jalte diye’, a romantic number from the film which is becoming popular already, the set was decorated with about 7000 diyas! Apparently 150 people were needed to keep the diyas burning through the shoot!! Have you watched the video of the song yet?

7. Not just a Family Drama! Sooraj Barjatya has included a lot of action sequences in PRDP. Infact, Hollywood’s famous stunt director, Greg Powell, the man behind stunts in films like Harry Potter, Fast & Furious and Skyfall, has been roped in to choreograph the high-octane action scenes for Salman! There are reports doing rounds saying that the climax of PRDP is possibly the longest ever in any Bollywood film. The climax of the film will have a sword fighting scene between Salman Khan and Neil Nitin Mukesh. Both the actors have been trained so that the scene looks royal and perfect.

We already know that Salman will be playing a double role in the movie and the actor will apparently be seen speaking French in the film. One of Salman’s avatars will be crowned as the King in the film and in this scene, he will be seen giving dialogues in French.

A song in the movie will run for a whole 13 minutes! Choreographer Ahmed Khan confirmed this is the longest song in Bollywood ever and it will have the whole family playing football in ‘sherwanis’ and ‘saris’ in “Barjatya Style”!

Sooraj Barjatya has recreated the ‘Sheesh Mahal’ for PRDP as an ode to Mughal-e-Azam which inspired him to become a filmmaker. Sooraj said, “I have been inspired, awed and overwhelmed by Mughal-e-Azam, a film that has always fuelled my imagination as a writer-director. We tried to pay a homage to this cult classic, which has shaped the Indian film industry in many ways by constructing the Sheesh Mahal. It is intrinsic to the plot. How Salman’s story and the Sheesh Mahal are connected will be revealed when the film opens on November 12.” The royal palace created in PRDP is apparently the biggest set ever made in Indian cinema, and is spread over 100,000 square feet. The set took 1000 days in the making. PRDP is grand in every sense. The film crew had around 500 crew members, 1500 background dancers and over 5000 people in the crowd! About 1200 kgs of sweets and namkeen and 5000 kgs of flowers were used in the film! WOW!

We all know Prem Ratan Dhan Payo is a very special film for Salman Khan as he is making a comeback on the big screen as Prem after a gap of 15 years. So, he has decided to host a special screening of the movie for Madhuri Dixit and Bhagyashree, with whom he has shared screen space in the past as Prem. Though no date has been fixed for the screening yet.

The film will also be released in Tamil and Telugu versions as Prema Leela and Meymarandhen Parayo. Salman Khan’s voice will be dubbed by Ram Charan Teja in its Telugu version.

That’s a lot of knowledge to be gained in a few minutes about Prem Ratan Dhan Payo. Don’t you agree?