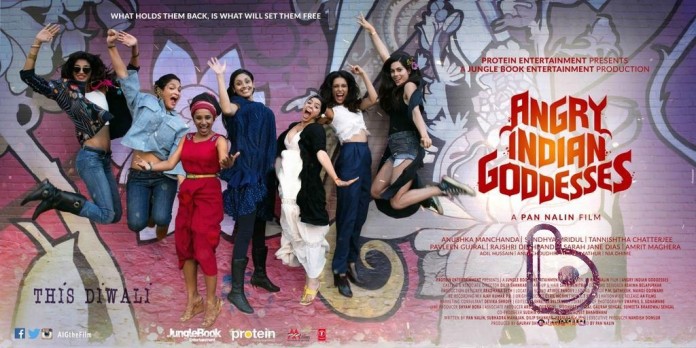 Angry Indian Goddesses is directed by Pan Nalin with Sandhya Mridul, Tannishtha Chatterjee, Sarah-Jane Dias, Anushka Manchanda, Amrit Maghera, Rajshri Deshpande and Pavleen Gujral playing lead roles with Adil Hussain. It was screened in the Special Presentations section of the 2015 Toronto International Film Festival, where it finished second in the voting for the People’s Choice Award.

Pan Nalin revealed that one of the characters in the movie is inspired by Katrina Kaif. Pan says, “Katrina is a hugely successful star in India, and when we were writing the movie, one character seemed to be following her career graph. Even though we haven’t shown Katrina’s entire journey, we surely were inspired by it. We had Amrit play the role of a girl, who, despite facing many cultural and lingual hindrances, migrated to India from London, UK, to make a career out of acting.”

The movie will be screened at the JioMami Festival, according to a tweet by the official page of the festival.

The film is set to release on November 12 along with Salman Khan’s Prem Ratan Dhan Payo.