The second song from ‘Jolly LLB 2’ is out and it’s titled “Bawra Mann”. It is a sweet, melodious and a soulful romantic song featuring Akshay Kumar and his onscreen wife Huma Qureshi. (Jolly LLB Trailer Review)

The song video starts with Akshay telling Huma that there is no other husband in Lucknow who will be making a whisky peg and offering it to his wife. Akshay Kumar is seen as a romantic husband who is madly in love with his wife Huma. Director Subhash Kapoor reveals that this song is an important juncture in the film. “The song has Akshay thanking Huma for her love and support.” Probe further and Subhash says, “Huma does something that saves his life, and Akki expresses his gratitude with this song.”

Talking about the track, he says “‘Bawra Mann’ is a beautiful, emotional and melodious number. It’s my favourite song in this film.”

Composed by Chirantan Bhatt, this soulful track is sung by Jubin Nautiyal and Neeti Mohan. The romance in the video was choreographed by Raju Khan and it was shot at Lucknow’s Ambedkar Park and Residency, a museum dedicated to the Uprising of 1857. 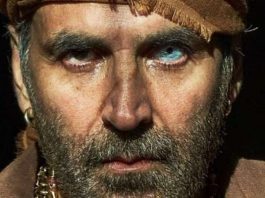