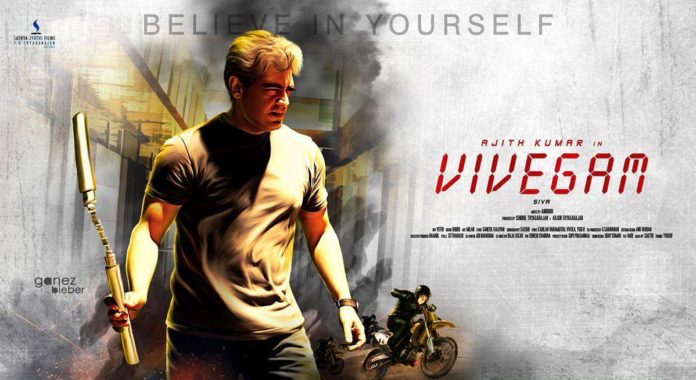 Superstar Ajith Kumar starrer comeback film Vivegam was released on 24th August 2017 and expected it is off to a record-breaking opening. As per early estimates, the movie earned around 20 crores at the box office on its first day in Tamil Nadu. Vivegam has emerged as the second highest opening day grosser in Tamil Nadu, only after Rajnikanth’s Kabali which grossed 21.5 crores.

Ajith has beaten his own opening day record of Vedalam (15.5 crores) which was released in 2015. This is a great opening for a film as the entertainment industry in the south has been severely affected by the implementation of GST and the hike in entertainment tax by the local government.

Vivegam was released in over 700 theatres in Tamil Nadu, 300 screens in Kerala and 450 screens in Telangana and Hyderabad. In overseas market too, the movie has got a big released with 160 screens in the US and 500 screens in Malaysia. The total screen count of the movie is around 3000 screens.

Not only in Tamil Nadu, the movie has performed well in others south Indian states as well. As per the reports coming, the first day collection of the movie in India will be around 35 crores.

In the US, the movie recorded the highest collection of 2017 for a Kollywood movies on the premiere. As per the reports, it earned $208K (1.38 crores) on premiere.

The movie has received mixed reviews from the critics and the distributors are bit worried now. The opening is exceptional and the movie is expected to make good money over the first weekend as the advance booking reports are solid. The scene will get clear on Monday.